Having said goodbye to Dee, we spent a few days wondering around Saigon just soaking it all up. We both love this city, for reasons that are hard to explain but I'll give it a go. The people here are lovely. The locals find you as interesting and curious as you find them. The city buzzes all day and all night, and somehow it doesn't get old. It feels alive with all the people that are living there, rushing around (or not!) in the craziest rush hour traffic you'll ever see. People socialise, cook, eat, sleep, do business, laugh, cry, love and live their whole lives right there on the pavements. And they wear that wide Vietnamese grin while they're doing it. Ever seen someone taking a nap on their parked motorbike, perfectly horizontal? Been run down by motorised traffic on the pavement? Walked straight out into incoming traffic to cross the road? No? Go to Saigon! It's just such a great, energetic place, I miss it already. 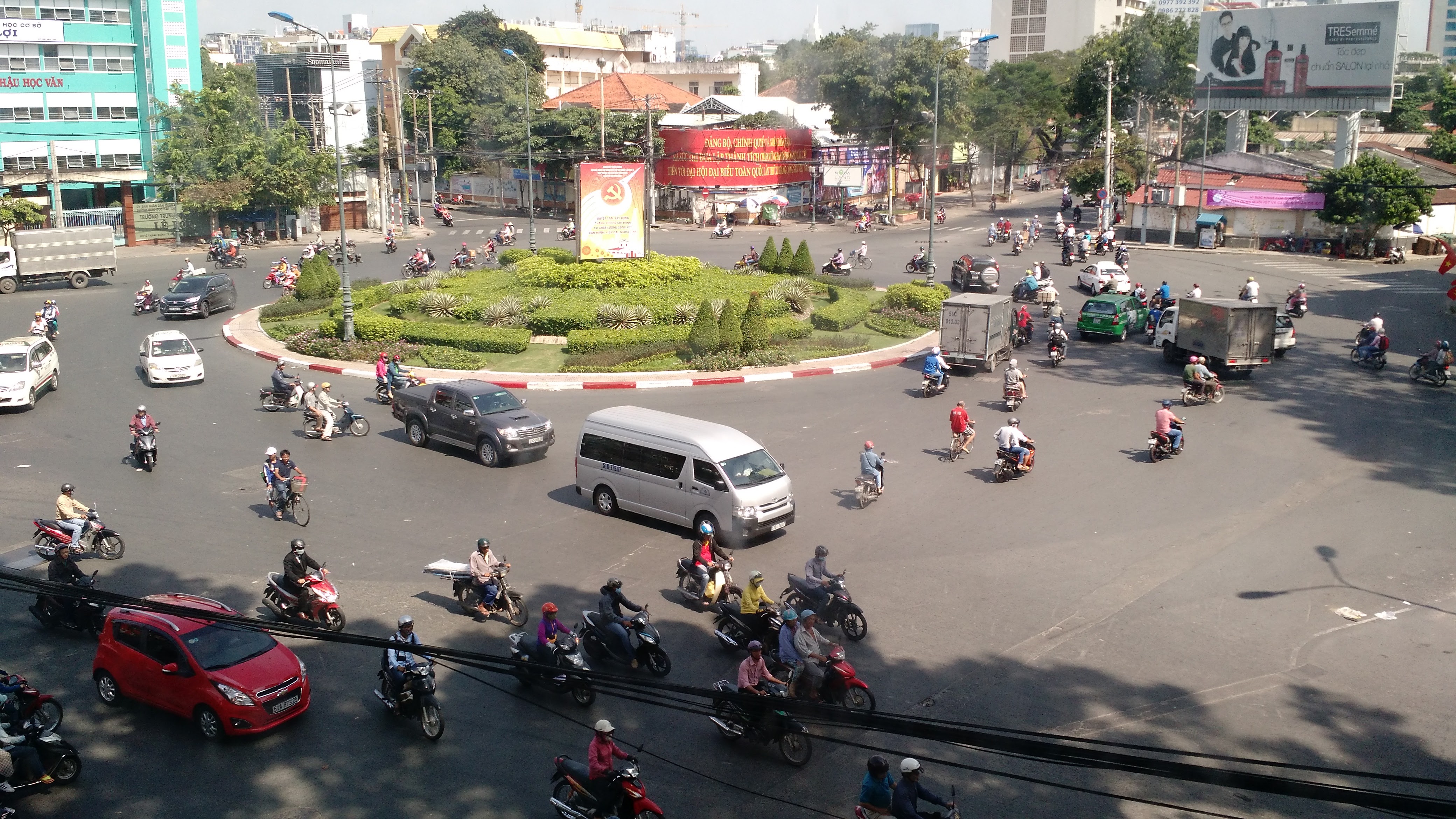 We also went to see the Cu Chi Tunnels from Saigon, built during the war as a way for the Vietnamese to survive and fight the Americans. The tunnels were the reason they won the war. They adapted to live underground, and they were definitely not luxury conditions. Some of the original tunnels are still in place, and some have been altered to allow tourists to shuffle through and get a taste of the way they lived. But, I'm sure you can imagine, western tourists are a slightly bigger breed than the Vietnamese, so the tunnels have been enlarged. But it's still a hell of a squeeze, especially with a backpack on, and some of it meant crawling crouched down. But at least there were some lights wired in in some parts. They also had working demonstrations of the guerilla warfare tactics used by the Vietnamese, and some of these were so gruesome. There was also a shooting range here for tourists to have a go at; poor taste, we thought, but the various vets seemed to love it. We took this time to look at the chickens and have a ice cream instead! Rich also decided this was a good time to get bitten by a wannabe bullet ant. 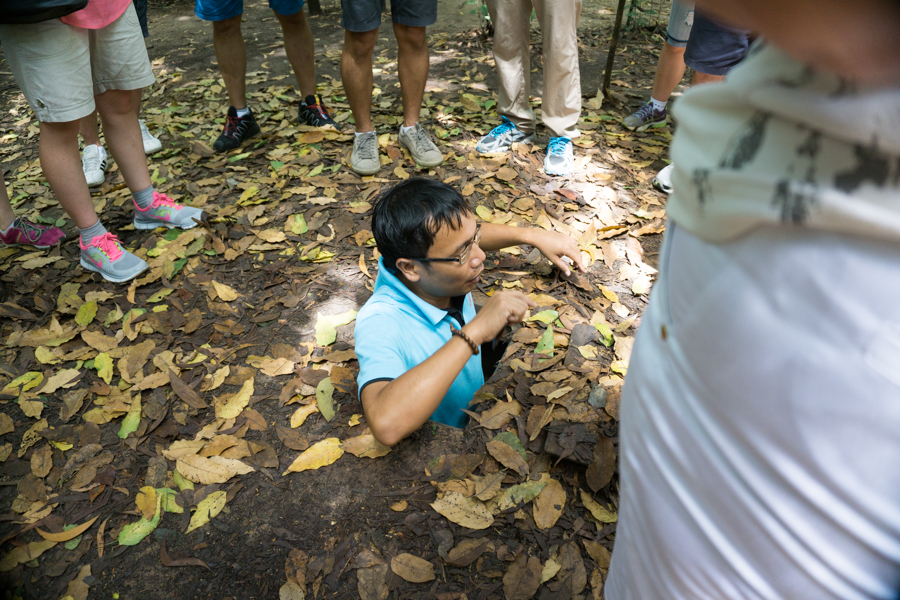 We took a flight up to Hanoi few days later, and arranged a bus to Halong Bay. We could have arranged a tour of Halong Bay that would've included transport to and from Hanoi, but we wanted to take our time and look around Halong City too, and I'm glad we did. Not because Halong City has anything (at all) happening there, but because Halong City has nothing (at all) happening there. It seems that 99% of Halong Bay tours are now arranged in Hanoi, and Halong City is losing out because of it. It's an empty shell. There are so, so many hotels in Halong City but they're all empty. There's only one proper restaurant in walking distance of the hotels, and it seems to be the restaurant that tour buses stop at before making their return journey to Hanoi. The streets were empty while we were there, and it was a bit of a shock arriving here from a city with a population of 7 million to see a "city" with a population of seemingly about 50. They're in the process of building a theme park here in the city, which is a shame for the landscape but desperately needed for the revenue. I guess once upon a time Halong City would've been a thriving place, but not now that Hanoi tour companies are stealing their business. There's nothing much to do here apart from book a tour of the bay.

So anyway! We umm'd and err'd and booked a 2-star, 3-day tour through our hotel (The Light Hotel - highly recommended if you ever go there!). It wasn't cheap, but we figured we'd most likely never be coming back, and this was something Rich had been looking forward to since we left home. Plus, how could we go to Vietnam and not see Halong Bay??

We made our way to the ferry port, and were almost not herded onto our boat with the rest of our group. I seem to have adopted a rather Asian approach of "it'll happen when it happens", but with Rich here we're sure not to miss a thing. Luckily! We were shown to our wood-clad double berth onboard, with aircon and a private bathroom (on a boat, crazy!) and then we were all rounded up and served lunch. Our group consisted of about 21 people, all of whom had either a double or twin room onboard. This wasn't a small boat, but I'd never have guessed there was that much space onboard. There were about 16 westerners, all under age 33, and a small Vietnamese family, who didn't speak any English. The two groups were entertained as separately as the itinerary would allow, and the family brought their own food onboard, instead of eating the meals provided. We'd been told we weren't allowed to bring food or drinks, but I wonder if they'd been offered a cheaper rate for feeding themselves. But meh. By the time lunch arrived, the stomach ache I'd been cursing had become too much to keep smiling through, so I took a pass and went to lie down. Later on it looked and felt like whatever bacteria had trespassed into my stomach had turned into a full size bowling ball. It was weird, but it had gone by morning. After sailing out of the bay during lunch, we went to see a cave. It was huge, and beautiful. It had been lit up with every colour light you can imagine, kind of spoiling it's natural beauty, but it was still amazing. 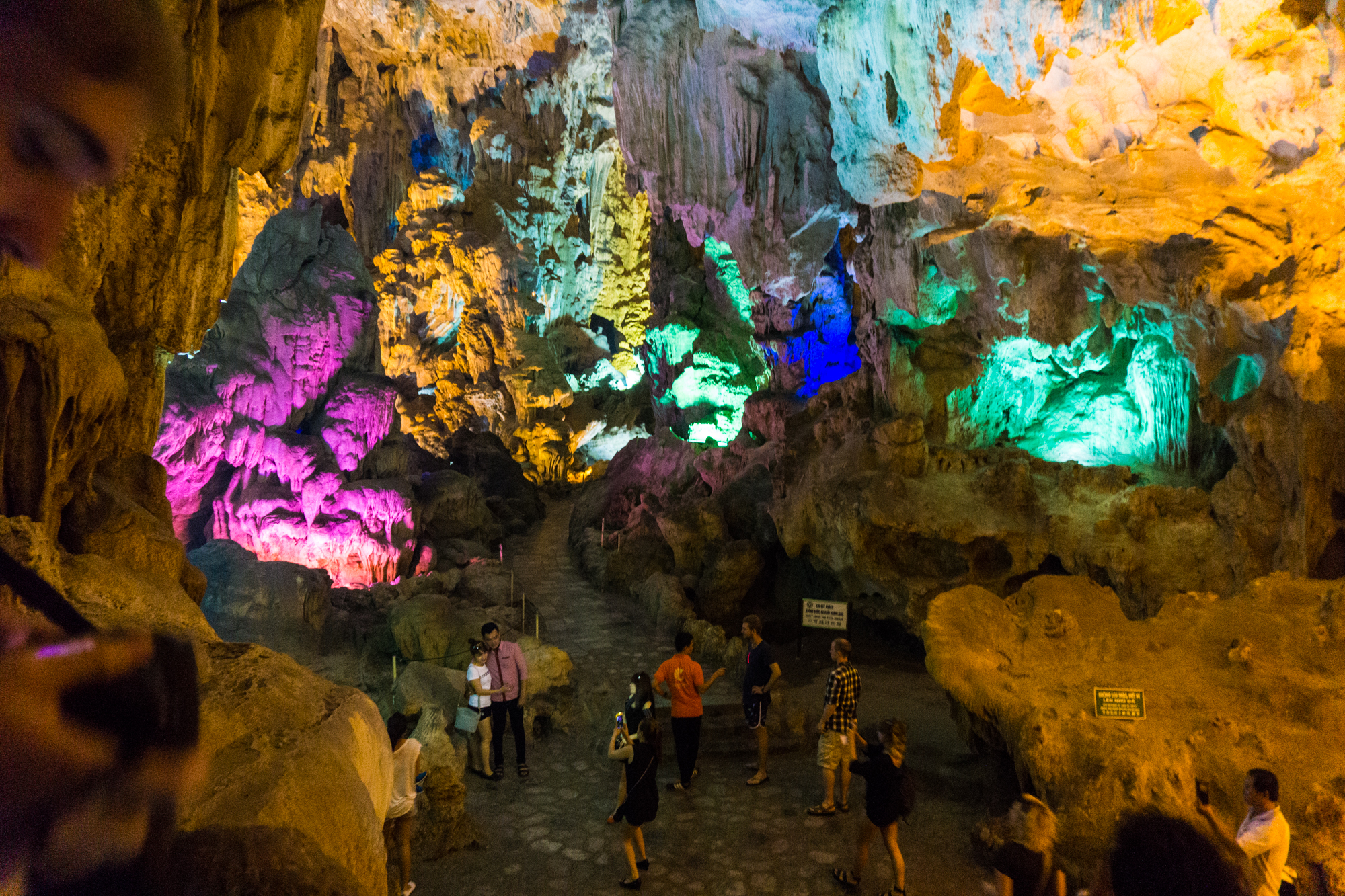 The day turned into night, and after a beautiful sunset, jumping off the boat for a swim and a feast for dinner the dining room turned into a karaoke bar. At this point I needed another lie down as my stomach was hurting. Shame! Next day we all emerged from our cabins early, though no one looked quite as chirpy as I felt, having been the only one to stay sober and get an early night. It's nice not to drink sometimes! We were filled with breakfast and promptly dropped into kayaks two at a time. It was still quite early, so the light around the islands/islets was soft, and as the sun was still low it was still quite cool. It was lovely. 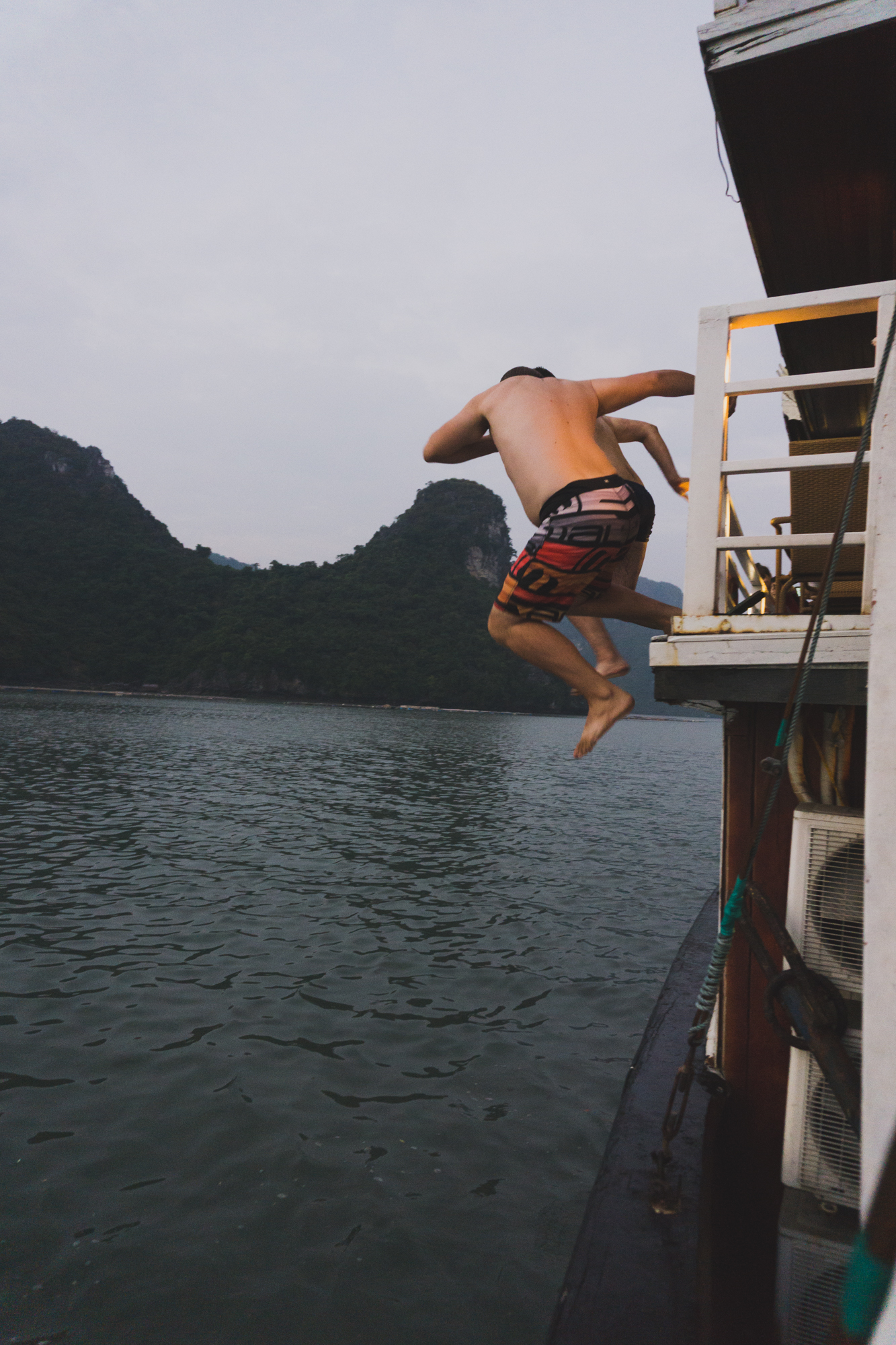 The group was separated after this, into people doing the 2-day tour and people doing the 3-day tour. We said our goodbyes and were eventually dropped off on another island to be transported to another boat. Lucasz, who we'd met at the port before we even got on the boat, had his eye on a floating fishing village that we kayaked past earlier that day, and had asked if there was any chance he could spend his second night there instead of on this other island as planned. The people in this fishing village don't speak a word of English as they never roam the land. They spend their whole lives floating on water - if you've seen the Vietnam Top Gear special from Halong Bay, you'll know the village. No one had ever asked to stay with them before, but a special request was sent just for Lucasz. He did end up staying there, and apparently spent his evening playing cards and drinking with the man that gave him some floor space in his hut to sleep on. Before he left Lucasz gave the man some money to thank him for his kindness, not much by our standards, but the man was reportedly overjoyed and quite emotional with gratitude. Now that's backpacking, and from someone who claimed he hadn't been at it for long! After our transfer to Monkey Island, Rich's foot injury was getting the better of him after he jumped in and kicked off the hull of the boat, shredding the sole of his left foot on the anti-fouling. Between us, we're normally much healthier, I promise; this was not our golden moment. Because of this we decided to pass on the offer of a difficult trek to the other side of the island to see the wild monkeys. Fun fact: a lot more of the islands in Halong Bay used to be inhabited by wild monkeys, but now only one island has them as the locals killed too many to eat their brains. Yep. So instead we spent the afternoon on the beach, catching some rays, watching people come and go and watching the sun set again. It's a hard life. We went to bed in our little wooden hut after another enormous feast with a new group of people, who apparently had heard the party on our boat the night before from across the bay! 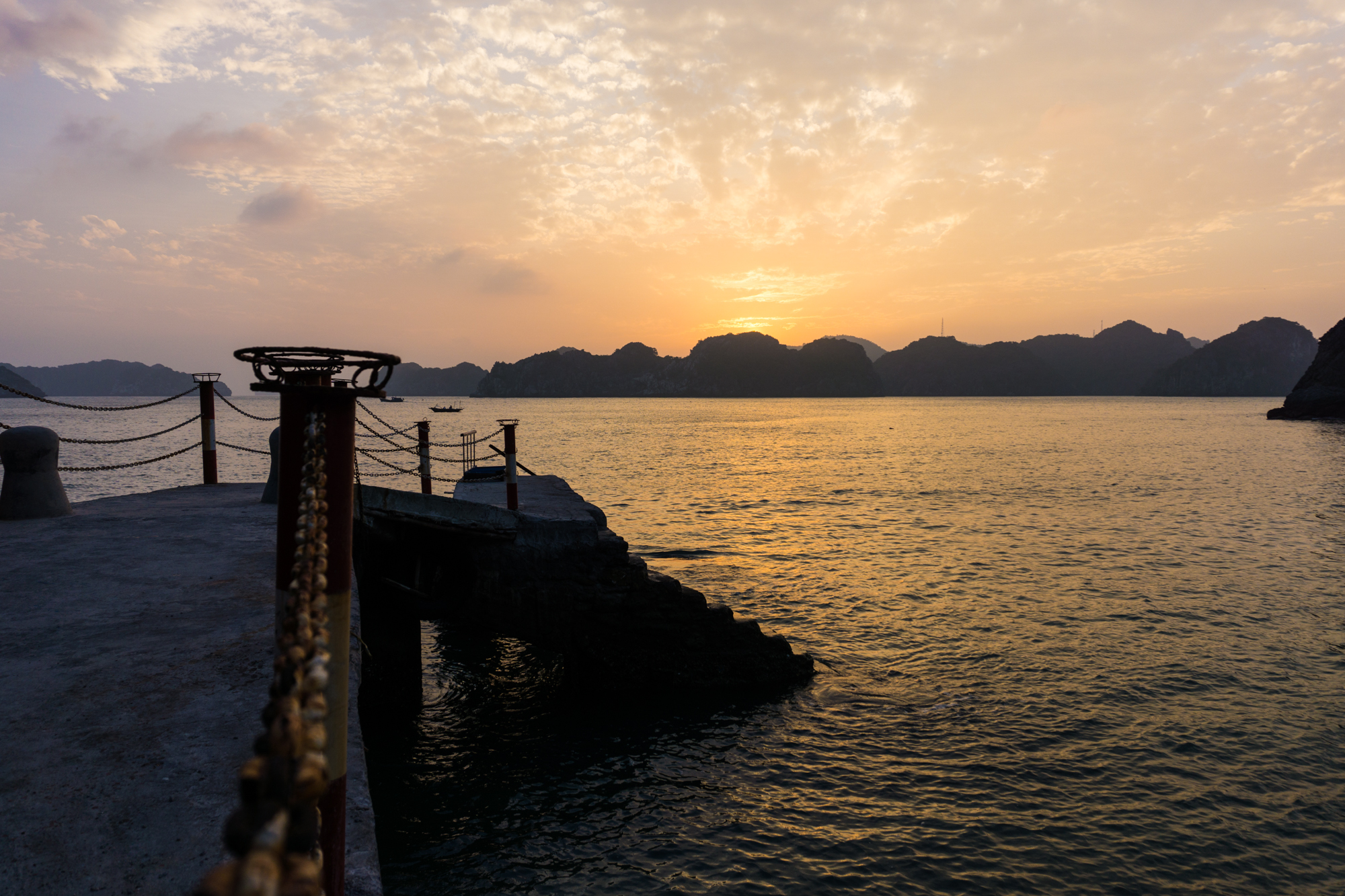 The next morning consisted of yet another huge meal and then a cooking lesson onboard teaching us how to make Vietnamese spring rolls, and ended with us being dropped back at Halong City in time for people to catch their bus transfers back to Hanoi. 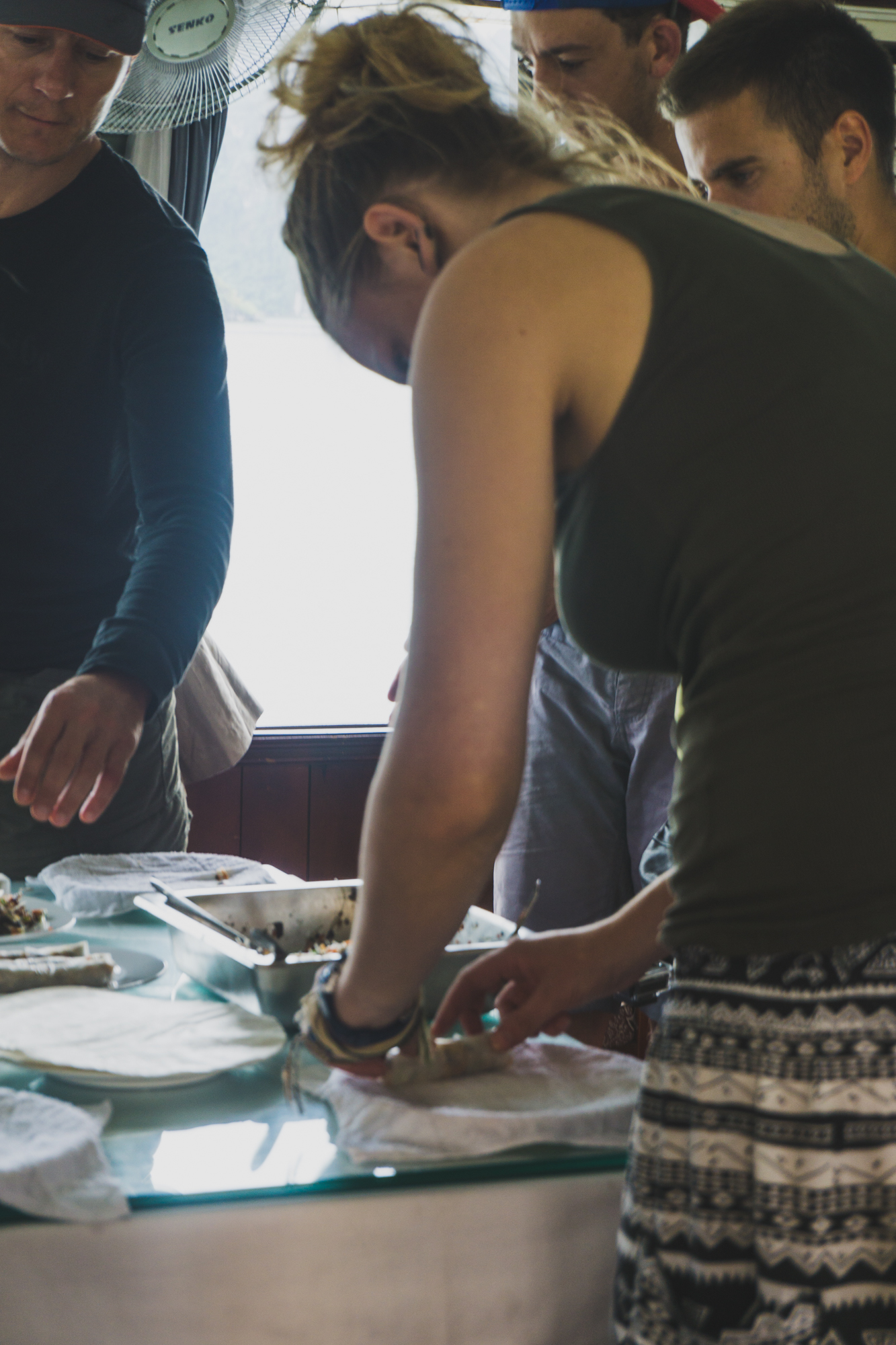 Halong Bay is great, but I was expecting better. It has nothing on El Nido in the Philippines. The water in Halong Bay is grey from pollution, and there was rubbish floating in quite a few places. I really do think my sense of wow is all off-whack at the moment, and maybe it's because I wasn't well for the first day or because it was cloudy for most of the time we were here, but I can't exactly recommend spending a great deal of time or money on a trip here. Go to El Nido! Having said that, I'm still so glad we went as the tour company we used, Golden Bay, would've made a trip around the Solent great fun. But instead we got to tick off Halong Bay from our list.