The Bus Journey From Hell

Part two of the Vietnam story is all about our 23 hour bus ride from Hue in Vietnam, to Vientiane in Laos. This journey has been dubbed "The Bus Ride From Hell" by many an intrepid traveller, but we got cocky. Plus, we didn't have a great deal of choice. 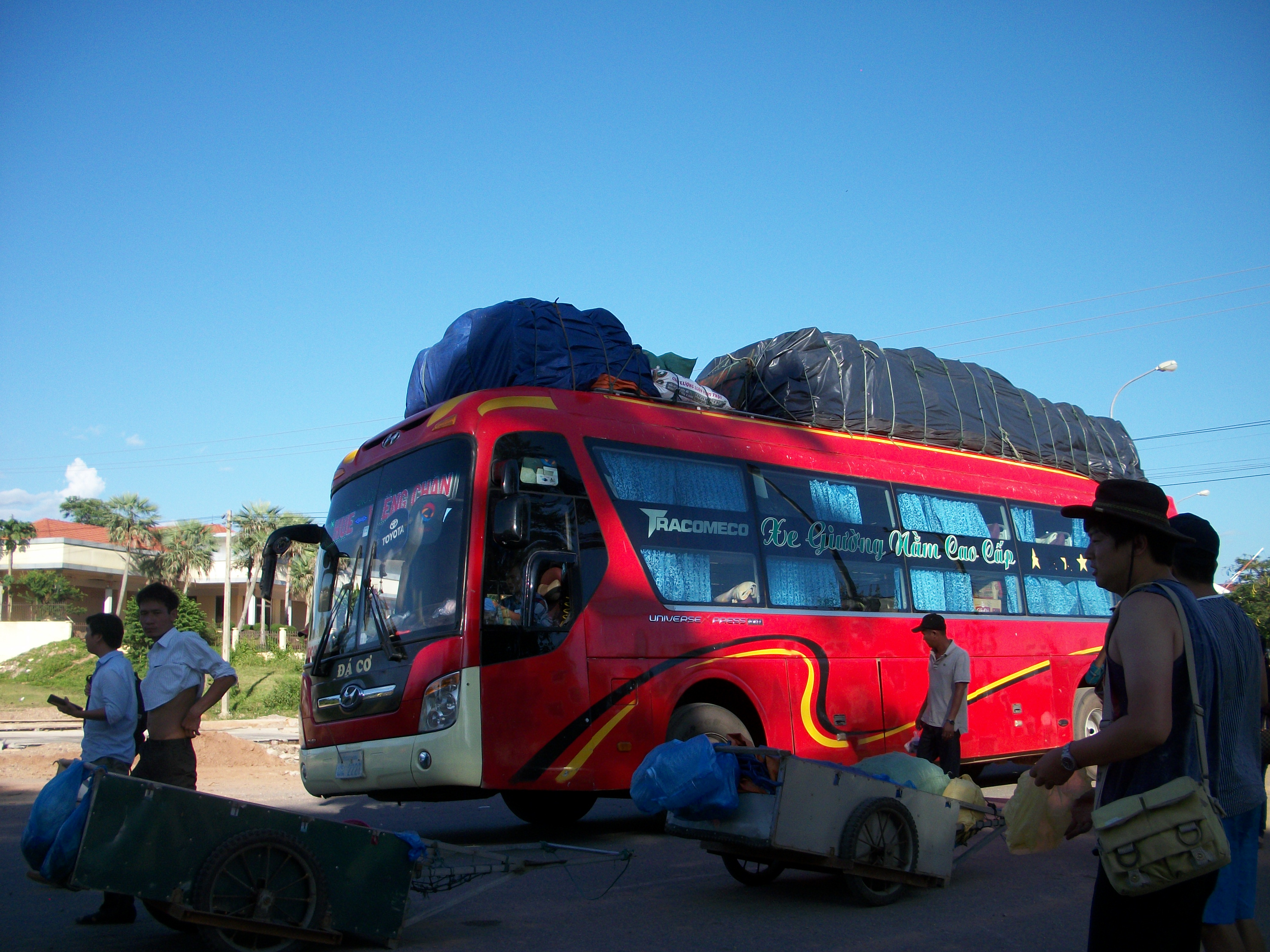 We arrived in Hue on another daytime sleeper coach, and found our hotel with only a little bit of trouble. I had chosen this hotel, and booked it because it was only £3 between us. Bargain, I thought. So that one was my fault, sorry Rich! Hue didn't have a great deal of appeal, so we decided to get the bus to Laos the next day, and asked our hotel to book us onto a bus the next morning. We ended up paying tourist prices for what was definitely not a tourist bus.

We had picked up some bus snacks (a pack of crisps each and some Oreos) the night before. Standard practice before any bus journey now. But while we were waiting for our bus a man from our hotel, who was waiting with us to give the driver a fraction of the money we had paid the hotel, managed to ask, in broken English, if we had food with us. This made me a bit worried about the meal situation, so I shot to a cart across the road and bought two mystery sandwiches. The bus eventually pulled up, and we climbed onboard the already full bus.

This was yet another sleeper bus, but very different from any we'd been on previously. It was being used as a lorry. The luggage compartment was stuffed full of cargo, and the bus had about 2 metres height of cargo neatly balanced on its roof. The beds were full of locals and the aisle was full as well, of people, 25 kilo rice sacks and other unlabelled packages. There are normally two aisles, but one of them had been filled with extra beds, balanced on the framework of the existing beds. The inside back of the bus was full of cargo. The rice was stacked four sacks high the entire length of the aisle, and had some very thin mats laid on for people to sit on. Two men right at the back of the bus vacated their beds for Rich and I to use, and as our choice was either to take the beds or sit in the aisle for the next 23 hours, we took the beds as instructed. A few minutes after we had climbed through the 30cm gaps (between the rice sacks and the top bed) into our seats, the aisle became full of people again. Rich and I were sealed inside definitely-not-western-sized cuccoons, unable to see or hear each other. At least I had a window seat, and could see something other than my own knees. Poor Rich had a pile of beer to his other side, which took a lot of convincing not to fall on him at every corner. This bus was so overloaded we made a lot of the journey at no more than about 10mph. The bus just couldn't get up the hills any faster.

The poor local man on top of the rice sacks between me and Rich had it even worse than we did. This guy had to tesselate with the other men in the aisle, and couldn't even put his arms by his side without elbowing either me or Rich in the face, so had them under his head for most of the journey. It was probably the same for everyone in the aisle, but I don't know as I couldn't see anyone else, although I could see a head of hair resting in the man's groin. I really hope he paid a lot less than were did for his ticket. I'm certain he did. 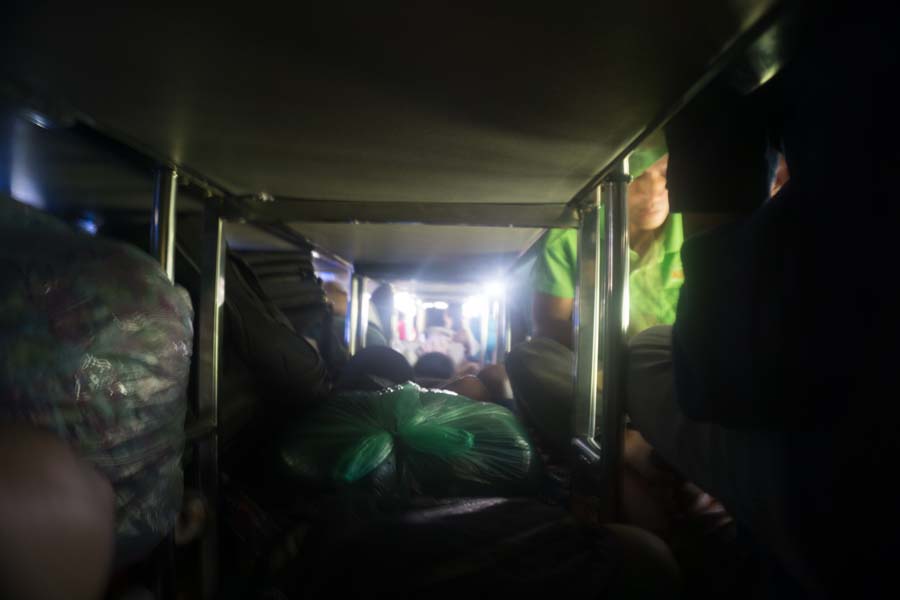 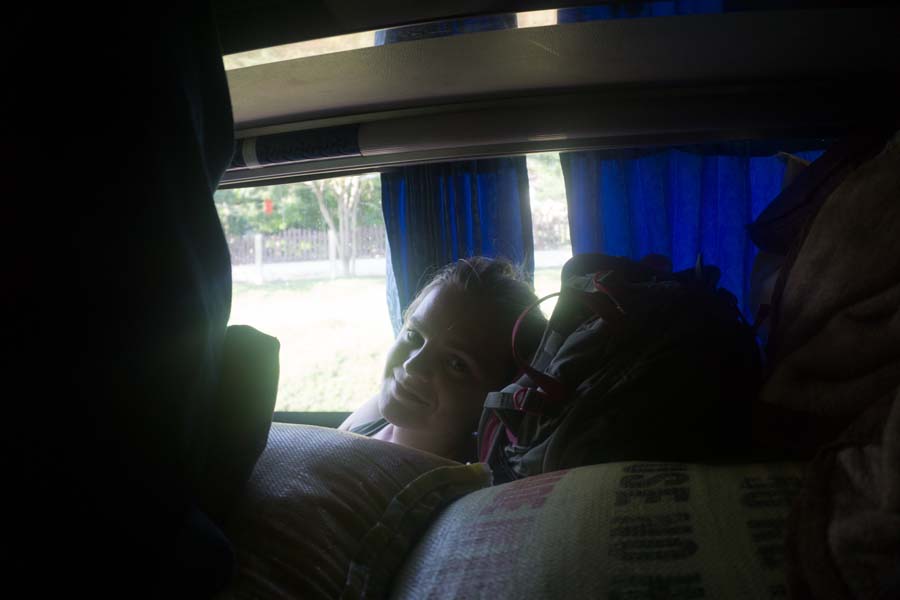 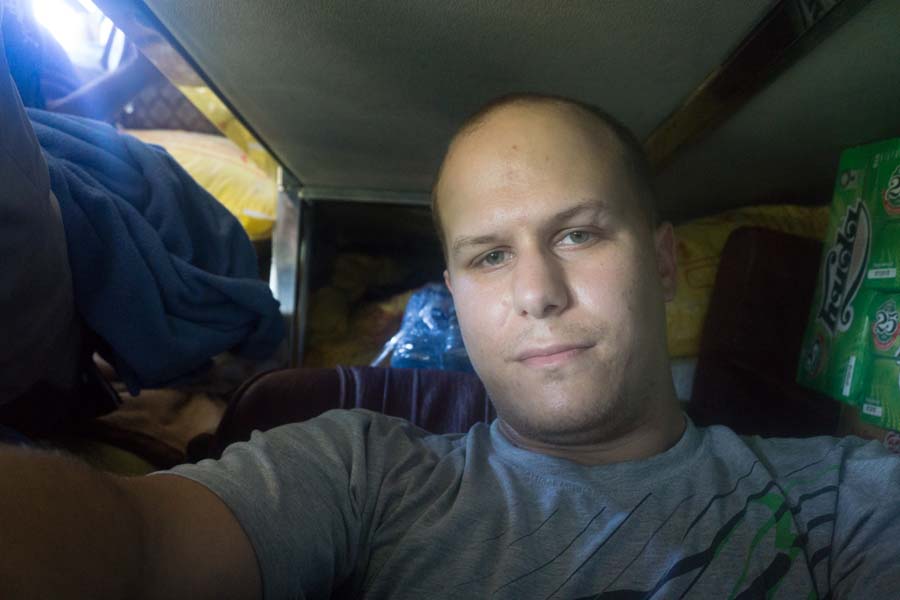 This bus was a death trap, and one that we had paid far too much to ride. Every corner felt like it could be the last. And everyone onboard, including the driver, must have realised that there was no way this bus was making any sudden stops or sharp turns, even if all our lives depended on it. As it was, we made the entire journey with the engine cover open to stop the engine from overheating. I'm pretty sure we got stopped by the police for that reason, but I can only assume they only closed the cover until we got out of sight. We were all made to close the curtains while we were being pulled over. I guess they would've disapproved if they'd seen inside.

A couple of hours into the journey we stopped at a petrol station, and I breathed a massive sigh of relief when a whole 7.5 tonne truck's worth of stuff was taken off the bus. But obviously, the space that had been made was filled by a different 7.5 tonne truck's worth of stuff. Silly me. Somehow, Rich got roped into helping with the shifting around of cargo, having got off the bus to pee at the wrong time.

Pee stops were another issue. As we were at the back of the bus we had to wait for everyone to get off the bus before we could start to climb out of our holes, which was neither fast nor easy. By the time we had got off, everyone else was usually starting to get back on, as these stops were only made at the side of the road so didn't take long. Yes, this meant I also had to pee by the side of the road. With nothing to hide behind, and traffic going past, and a bus of 95% male passengers next to me. On one occasion the bus started to drive off while Rich and I were about to pee, as everyone else had already had time to climb off, do their business and get back on. Both hot, sweaty (the bus did have aircon, which dripped on my head every 3-4 minutes, but did no more than that to help anything), cramped and dehydrated from being unsure if/when we would stop next, Rich lost his rag a little, ran back to the bus and yelled at the bus driver to wait. So he waited. Not that he spoke enough English to have understood the words, but the tone came through loud and clear.

When we finally got to the Vietnam/Laos border everyone got off the bus and piled into a restaurant. We were unsure where we were, and had merely been pointed toward the border when the driver ordered us off the bus, yelling "passport" at us. We walked into a nearby restaurant kitchen to use the toilet, standard practice again, and deciding not to eat here as we weren't sure how long we had to get across the border, decided to eat on the other side. There were no signs or arrows, and at the time we didn't even know why we couldn't stay on the bus to cross the border. Or even if the bus would definitely be meeting us on the other side. It's a long straight road towards the border from where the bus stopped, with a lot of important looking buildings, offices, checkpoints etc. We asked at every window what we were supposed to do about buying a visa, but were met with blank faces each time. Eventually we found the right place, after getting mildly sunburnt and seriously soaked in sweat. It was a very difficult few conversations between us and various border officials, but we finally got our visas. We had read beforehand that extortion fees were common, so we were expecting it. When the woman behind the counter tried to charge us too much money (an extra $5 because it was a Sunday), it was my turn to lose my rag. I told her, loudly and in no uncertain terms that the price was only $35. So that's what we paid. After finally crossing the border, we were relieved to think the worst part was over. We went to get some food and something to drink, but the shops wouldn't take anything except the local currency, of which we had none.

After roughly a 4 hour wait for the bus, we all climbed back on board and crammed ourselves into our assigned crevices. The long break had been hot, hungry, thirsty and difficult, but it had been a welcome chance for everyone to at least straighten their limbs for a while. If we'd known it'd be that long we'd have taken a bit more water with us, or at least changed some money for local currency when the woman climbed on the bus and actually stepped on everyone in the aisle to see who wanted to change money. But hey. You live, you learn!

Then was the longest part of the journey, from the border to the Laos capital, Vientiane. This stretch took us through the night, and it was so hard to sleep on this bus, but somehow we both managed to get a couple of hours worth of broken sleep. I was woken up so many times by the loud music the bus driver played until about 3am (to keep himself awake maybe), the aircon dripping on my head (eventually I put the dog blanket I'd been given over my head, and decided I'd take the risk of suffocation in that heat - there was no space to move my head far enough to get away from it), middle-aisle-man elbowing me in the face several times (I guess when he managed to fall asleep), the loud music, pins and needles from being folded up for so long, the line of ants crawling along the narrow window ledge tickling my arm, the loud music, the bus swaying around a corner and, eventually, the sun coming up.

When we arrived in Vientiane, stepped off the bus and were miraculously reunited with our bags, it was like arriving at the pearly gates. It was just so, so good! I've since read some other experiences of this journey online, and not one of them even comes close to how bad this journey was. Not one. And I'm pretty sure I've not even done a very good job of explaining it here. One person even said they'd do it again in a flash if they needed to. Pah! I'm now a bit worried about getting on our next bus. But I'm already sworn off trains, after the trans-Siberian, so I'm not sure I can do the same with buses. Can I?