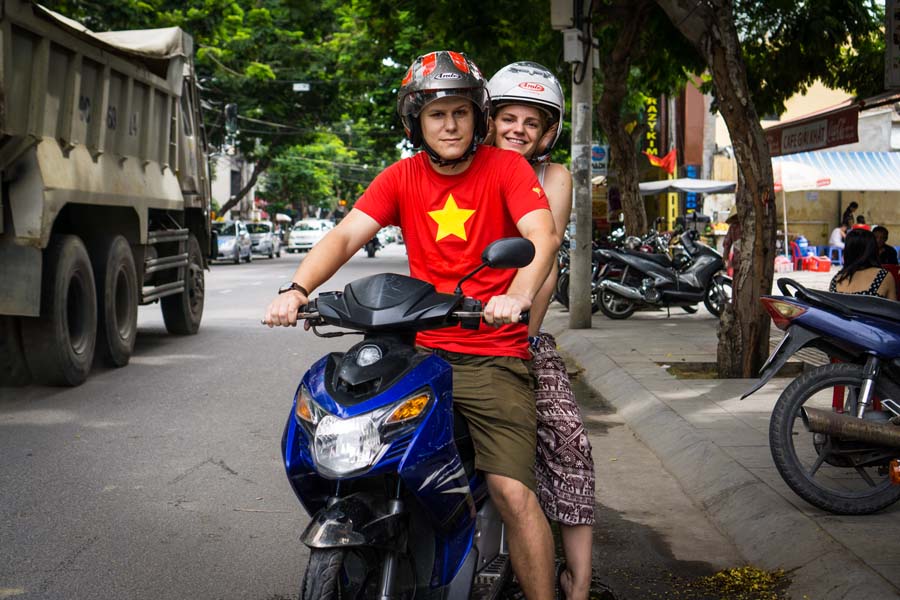 As you'll have read in the previous blog, we had a brilliant time in Vietnam before starting our 5 day tour along the Ho Chi Minh Trail, when it turned from brilliant to almost indescribable (in the good sense!). We started our tour by strapping on our backpacks and walking round to the tour companies office. Pretty soon we had helmets on our heads, all but one bag was on the bikes (mine was sent by coach to our end destination) and we were setting off through the rush hour traffic. Our first stop that day was only about 20 minutes in, and gave us our first real chance to chat to Vu, our local guide, properly. He's 33 and has a wife and 4 year old daughter, who he affectionately calls "Gucci", as " no money can buy her ". We later found out that Vu and his family live in the city in a 20sq metre room without a kitchen, and have to either buy meals out or use their family's kitchen to cook. They spend most of their income on the rent, and consider themselves lucky that Vu has a job to pay for it. It's unlikely that he'll ever be able to afford a bigger flat/house, and by the sound of it they would all be in trouble if he ever couldn't work. The government wouldn't come to their rescue. I felt bad for taking him away from his family for 5 days, as his gorgeous little girl was very clearly the light of his life. But he assured me it was ok. The guilt that got Rich though was that Vu put his heart and soul into his work, working from 7am until 9pm six or seven days a week, and got so little back in return. Hard work is seemingly not rewarded in any of the communist countries we've been to, and it was only chance that means we were born into countries that care. Why us, and not Vu? 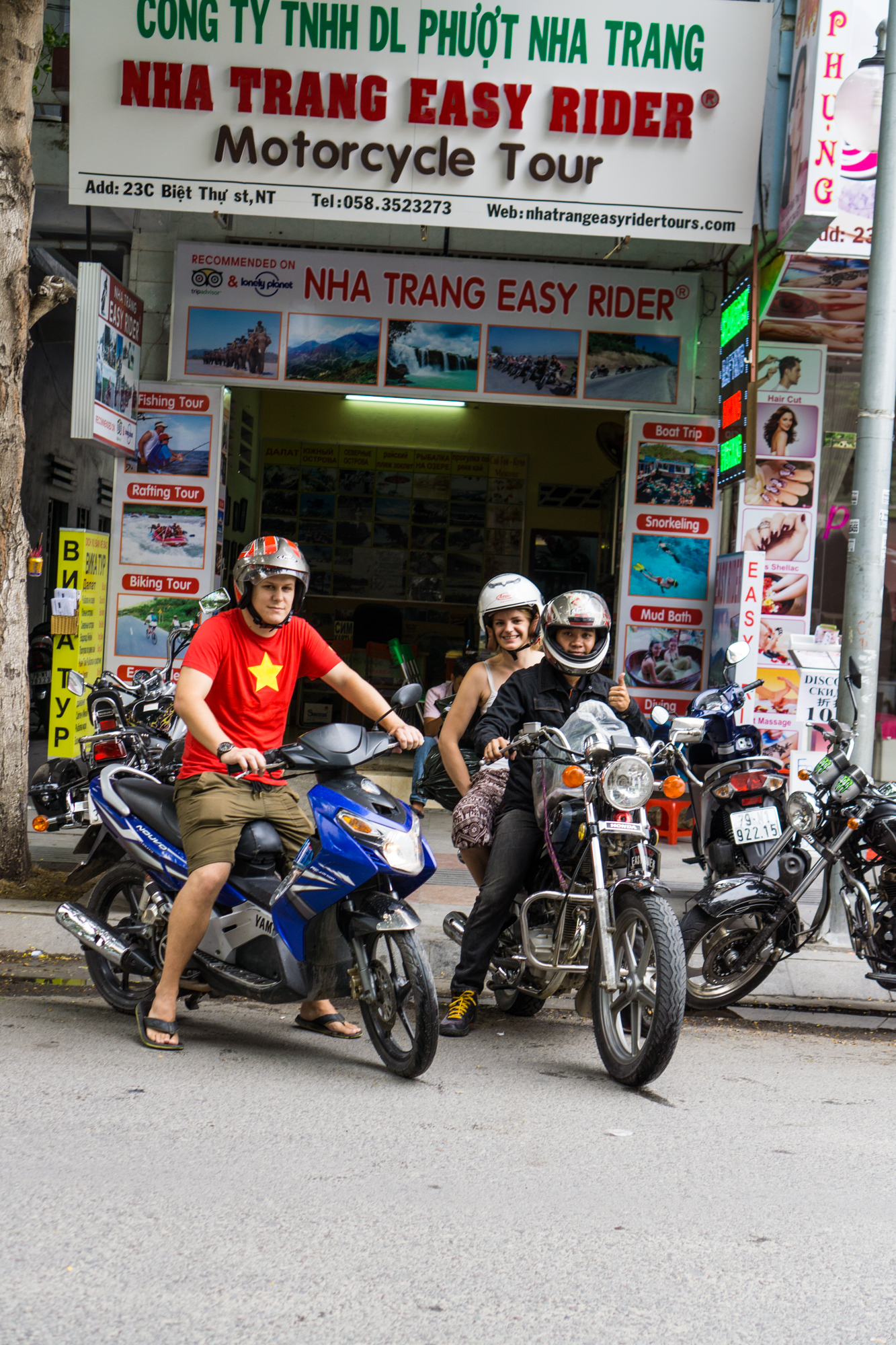 Our second stop was at Vu's fathers house, a small concrete home with hammocks for beds and curtains for doors. He was a very warm man who introduced himself with "my name is 'Funny' ", a toothy grin, and a two-handed handshake. He used to be an Easy Rider tour guide too, and is the reason Vu is now doing the same thing. We found out that Funny fought in the American War, as it's known over here, so Vu learnt both sides of the story, the South Vietnamese point of view from his father, and the North Vietnamese side, which is taught in schools. It was here that when I asked about his mother, Vu explained that she has died a few weeks after he joined the army for his two years subscription, aged 18. But he didn't leave. He couldn't, so he just suffered. He also tentatively asked if we would mind stopping at a family funeral that morning, so he could pay his respects. His cousins brother had died a few days ago, so off we went, Rich giving Funny a ride on the back of his bike, and me on the back of Vu's bike. As we arrived, the first thing we noticed was the loud, live, fairly upbeat music. The only outwardly sad person here was Vu's cousin, who barely looked up from the table. I felt terrible intruding, but we were greeted with big smiles and open arms. We took no photos for obvious reasons. Apparently when someone dies in Vietnam, it's shouldn't be seen as a sad occasion. It's just God's choice (Vu's family are Catholic. Interestingly his wife is from a Buddhist family, who took no issue at all at the difference in religion. However Vu's family, with the exception of his father, were very unhappy about it. -Rich).

Pretty much our entire 5 days was just as emotionally charged, but also physically draining. It's incredible how tired you get having that much fresh air rammed down your windpipe for 8 hours a day, and I was on the back of Vu's bike the whole way, so poor Rich was even more tired from riding his own motorbike the entire 1,000km journey. We both got sunburnt on that first day, foolishly not realizing how riding at 50km/hour means you can't feel the heat from the sun. Lesson learnt. I also managed to sustain the first injury that first night, too, and slipped over in the shower cutting my elbow on the drain cover. It's perfectly standard practice here to have a smoothly tiled bathroom floor, and a random shower on the wall with no curtain around it or mat to stand on. So it was going to happen sooner or later. I've already prepared my line about the scar... "Oh this? I got this in 'Nam. Oh no, it's not what you think, obviously I'm too young. I got this on a motorbike tour up the Ho Chi Minh Trail. Yeah. I slipped in the shower."

Day two brought the first rainstorm of the journey. Thankfully Vu had brought some waterproofs with him for us, although only one set between us, so I wore the trousers (which were great, but didn't stop the leech somehow getting in to feast on day 4) and my own waterproof jacket, and Rich wore the poncho. Haha! He seemed very impressed when Vu first pulled this poncho out, as it was about 3 feet wide, 4 feet long, and unmistakably camouflage, but upon closer inspection, he saw "US Army" printed all over it. Upon closer inspection again, the gaps between these logos were filled with the WW2 German Nazi logo. His face was a picture. If it hadn't been chucking it down I would've got the camera out! I reckon the tour company must've got these on the cheap somewhere! One evening Vu warned us of a storm on the road ahead, and explained afterwards that he was trying to gauge our reactions on how safe we'd feel. We'd both waved it off and told him we didn't mind the wet weather, as the rain was at least warm. He thought this was really funny, as some people are apparently very nervous about riding through storms and rain, but he then announced "I guess this is normal for you", being English.

As well as everything we learnt along the way, we saw some incredible views. I had the breath stolen from my lungs several times. So much of Vietnam is completely unspoilt, and we got to see so much raw beauty. The Ho Chi Minh Trail was built through the jungle, curving around mountains, past waterfalls and through clouds and ravines, so that the North Vietnamese could move soldiers and supplies around without being detected. We ate local dishes, and learnt how to eat them properly at local restaurants, and learnt local customs and games (billiards is popular here). We slowed down several times a day to get past animals grazing in the road - nobody minds, that's just where they graze. We saw how the land is used, to farm honey, coffee, sugar, rice, rubber and fruit. We saw monument after monument, built for the war dead - so many of them younger than me. To borrow a line from the Lonely Planet guide I picked up at a bookswap in Shanghai, "the Vietnamese are battle-hardened, proud and nationalist, as they have earned their stripes in successive skirmishes with the world's mightiest powers." And they really are. 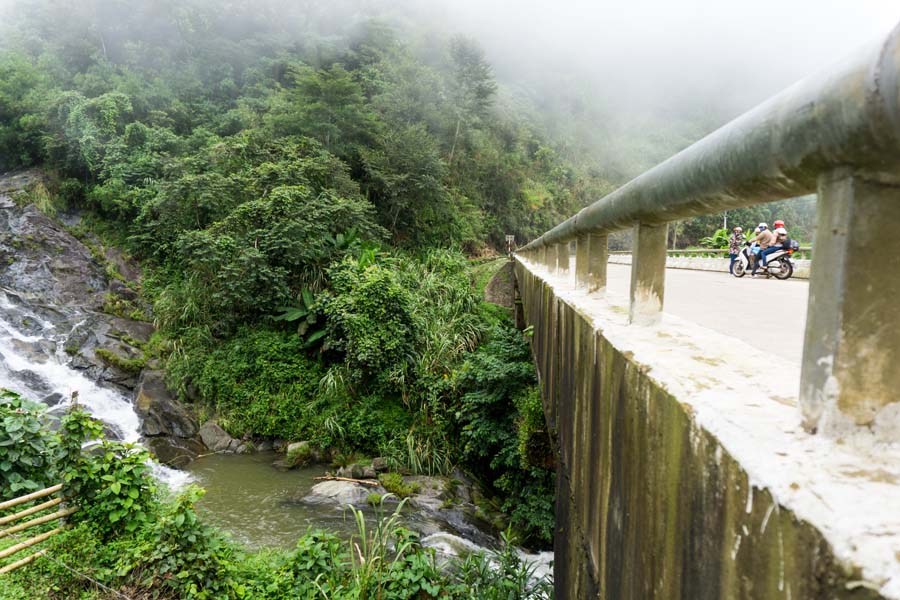 One of the monuments we stopped at included two tanks from the war. We were told by Vu to climb up for a photo, and felt very disrespectful doing it, but didn't like to argue more than we had tried to. Seeing inside the tank, climbing on it and reading the names of the people who died inside was very tough. In the West we turn away from things we find hard to see, and we comfort each other if we do find something hard to look at. Here, it is embraced and encouraged. 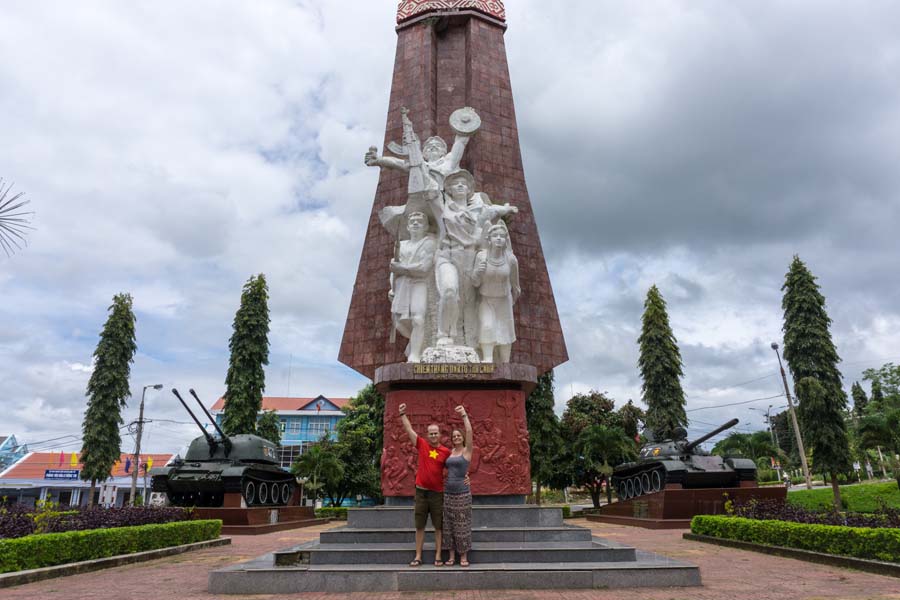 The motorbikes made the journey with very little trouble. Having been in the job for 9 years (apparently still not long enough for anyone to have ever told him the meaning of the word Dong, Vietnamese currency, in English!), Vu seemed to know the bikes as well as he knew his own family. They had oil changes and various tweaks en route, without us ever knowing they needed it. It seems you really are only ever a matter of meters away from someone who can fix a motorbike in Vietnam. 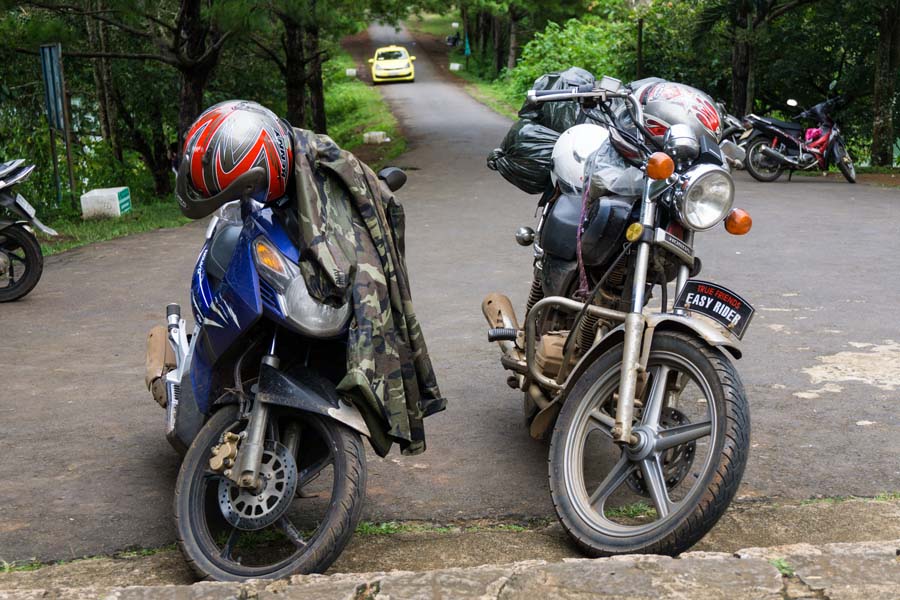 I just couldn't cover everything that we saw and did along the way, it would take the same time again to write. But it was one hell of an experience. We tipped Vu as much as we could afford, but still pitifully less than he deserved, and bought him his first ever burger at the end of the trip. It was sad to say goodbye, as we learnt so much from him and his willingness not to censor his opinions and knowledge, but he's inspired us both to come back one day to buy a bike and ride the whole length of the country on the Ho Chi Minh Trail. He's instructed us to come back to find him for advice if we do, so we'll see him then. Thanks Vu, for the ride of our lives! 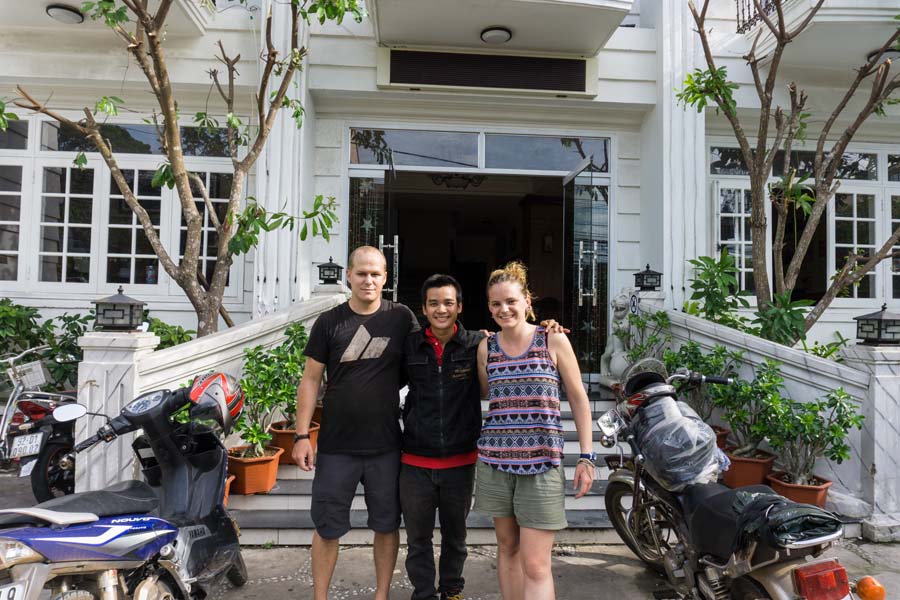