Blogging is so quick and easy. I really don't know why I'm not able to keep up. It means that this is a bit of a marathon blog, so I'm sorry about that!

Rich's last blog came from Satun in Thailand, and now we're in Malacca, Malaysia, having visited Langkawi, Georgetown, Cameron Highlands and Kuala Lumpur in between. I've gotta say it, I adore Malaysia! Each and every one of the places we've been to here has been absolutely gorgeous, and I've no doubt the places we still have left to see will be too.

So we left our luxury resort (serious luxury, for £6 a night each!) in Satun, Thailand, to get a ferry across to the Malaysian island of Langkawi. After chatting to a staff member at the resort in Satun about our plans, she so kindly gave us a free lift to the ferry port about a 15 minute drive away. Thais just keep surprising us with their kindness, which was really handy as we weren't too sure how to get a Songtao (a pickup that operates like a bus) there. 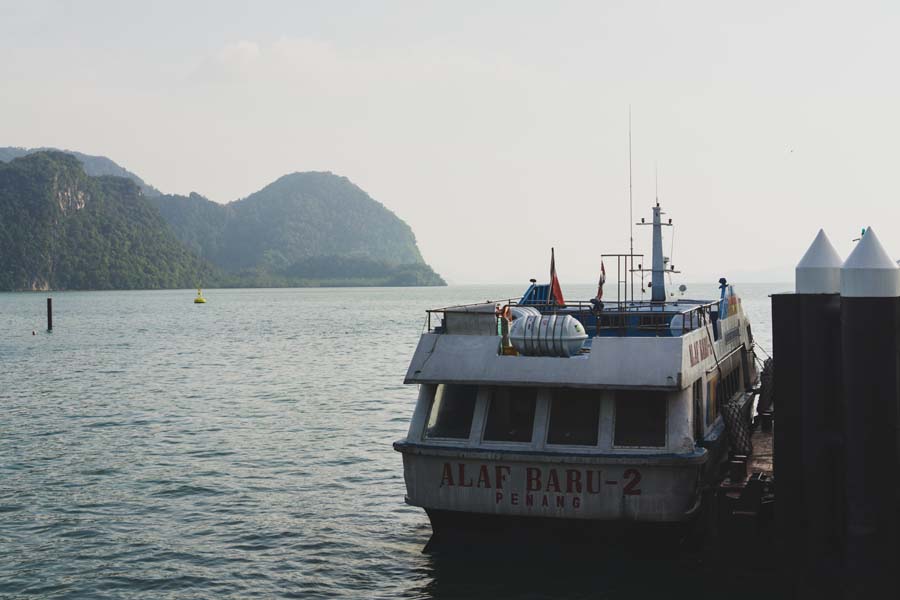 The ferry was chilly, but fast, and we got another exciting passport stamp at the gate on arrival. We then shared a taxi with some Yemeni guys who were at uni on the island, to somewhere within walking distance of our hotel. Just as a warning, if you ever end up going to Langkawi, don't stay at the Altis Hotel. But the less I say about that the better I think! We made a bit of a boo boo here, as we arrived at the start of Eide, a celebration to mark the end of Ramadan, so pretty much everything was closed for the 3 nights we were on the island, and we couldn't even hire any scooters to explore. I'm still dead chuffed we went here though, as the island was declared a tax free zone in 1987 to encourage tourism. This meant cheap chocolate, and plenty of time to stuff my smiling, sunburnt face with said cheap chocolate! It was exactly what I needed. We walked as far as we could in our time here, and saw an enormous eagle statue, monuments and beautiful parks, ate some incredible middle eastern cuisine, joked with locals and got caught in more downpours. But for me, it was all about the chocolate. 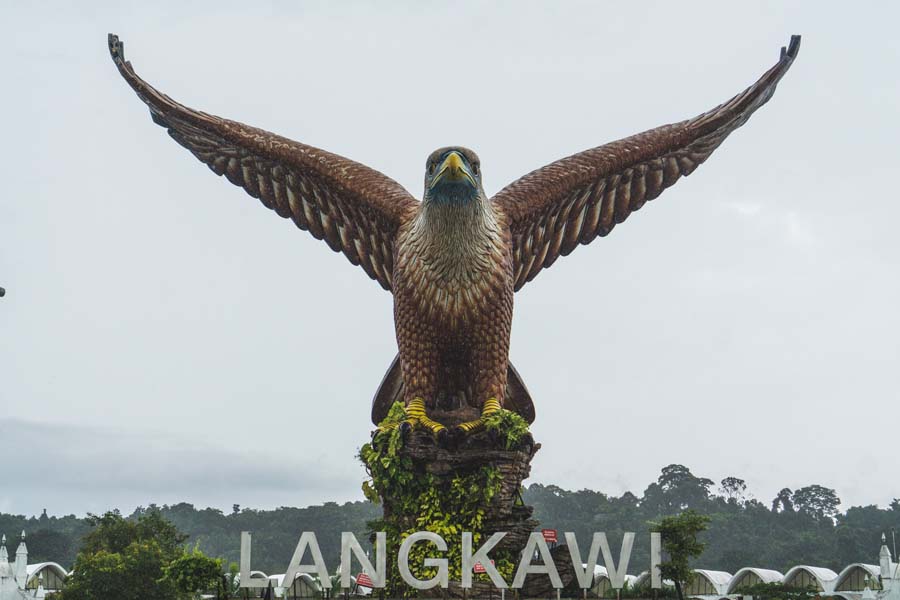 When the time came, we took another ferry down to the island of Penang, where we stayed in Georgetown. As soon as we arrived I made the decision that this was by far the best place in Malaysia, but our destinations have just continued to wow. Georgetown is a giant melting pot of cultures, and if you're a food fan then you need to come here at some point in your life. There are nyonya (Chinese out of China) cafes and carts, Indian restaurants and cafes that wouldn't have been out of place at home. Our cheapest meal here was about £2.50 for both of us, and mine was a curry with what must have been a quarter of a chicken in it. I spent most of this meal staring at Indian people eating curry without cutlery. It was genuinely fascinating, and made me a bit confused, as I'm not sure what it says about me that I would really struggle to do that. I couldn't feed myself without the metal tools I have been taught to use, not even using just my own hands... But I digress. We only had 3 nights here again, and as the third day would again be spent traveling to our next destination we had a lot to cram in. Our B&B owner was a Chinese man called Tony, who pretty much helped us put together a personalised itinerary, and gave us a free map to boot. I definitely recommend Malabar Inn! We saw an old Chinese Emperor's house, in all its glory and riches. We saw a lot of street art, both spray painted and in wrought iron. We walked around the old piers, where Chinese immigrants set up houses and businesses delivering goods from boats, to then become quite rich from the fruits of their labor as the economy grew. We used our first laundromat, and browsed shops, and took photos, and ate. 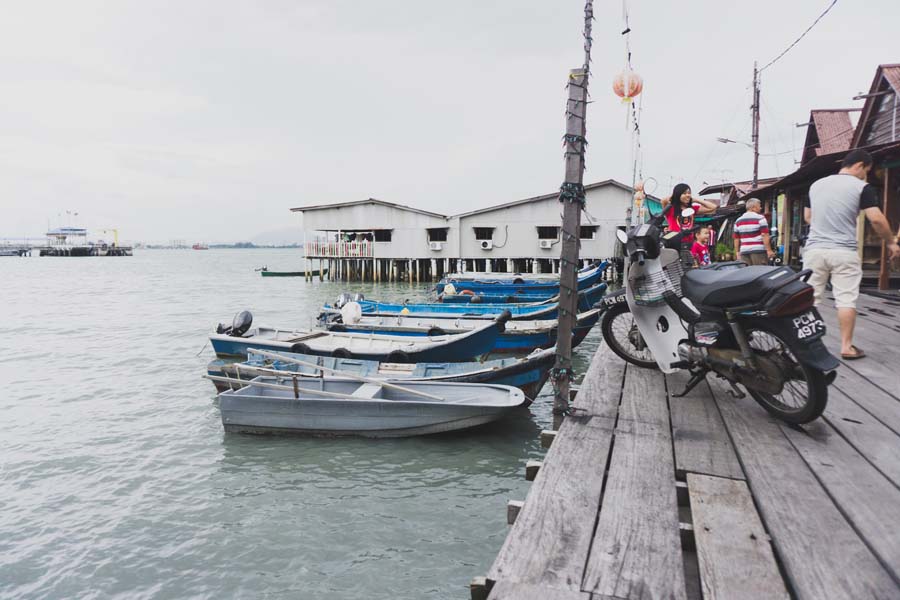 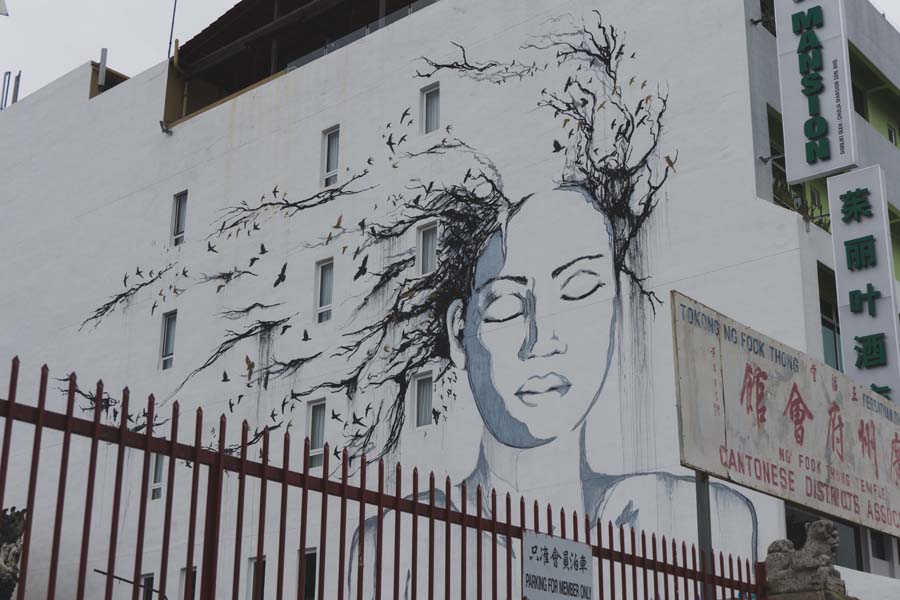 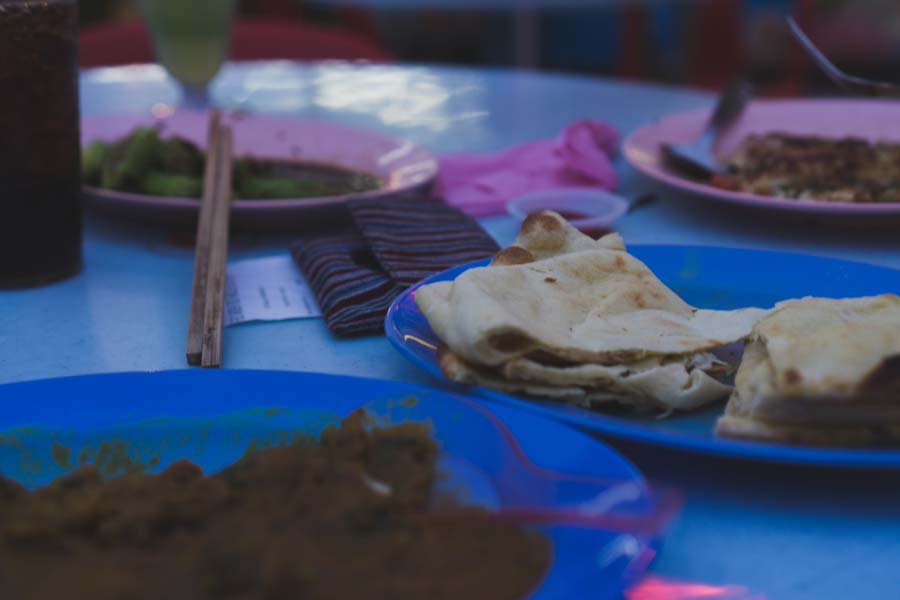 Then we got the bus up to the Cameron Highlands, and my eyes will never be the same again. Google it, right now. Because the photos we took could never do it justice. It was like being in an epic film set. We came here to see tea plantations, and took a one day tour that had this on the itinerary. We started the tour by being crammed into the boot of a crazy 4x4 that had horns on the bonnet, and driven to the start of a jungle path. 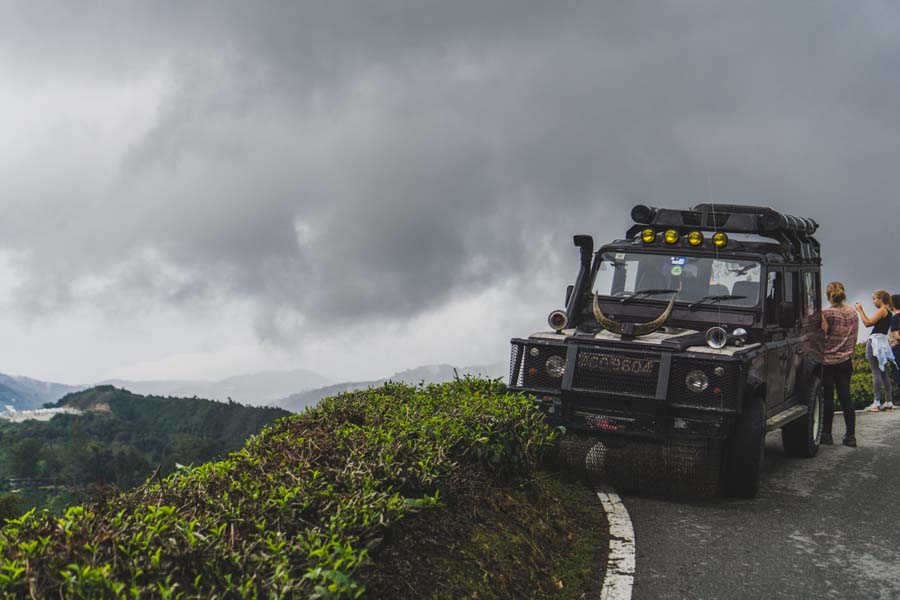 Along with the rest of the group, we hiked 12km through the jungle to see a rafflesia, a flower that only blooms for about one week of every year, and we just happened to be there at the right time. It's enormous, this flower. Apparently it's the biggest in the world, but a lot of stuff here seems to be the biggest/best/first/only in the world, so I took that with a pinch of salt, but it honestly wouldn't be hard to believe. (Rich: I Googled it, it is.) Our guide made me a sun shade out of fern, gave me a wild Orchid (which I put in my hair) and fed me mountain berries. I think it might've been to distract me, after I quizzed him if all the locals he had brought along were for protection in the jungle! He didn't deny this was true, just kind of half shook his head and laughed... On our return route we drank some water from bamboo, which tasted so fresh! Both mine and Rich's feet took some hammering on this trek, but Rich's big toenails have both since turned black to prove it. After the trek we got a hunting blowpipe demonstration, and I failed miserably when it was my turn to have a go. The dart just fell out the end and plopped on the floor, haha! And then I fell over when Rich had his go, so missed the chance to get a photo. We carried on to a tea plantation and factory, which was fascinating. The workers at these farms get paid 24 sen per kilo of leaves they pick. That's about 4p. Per kilo. Of leaves. Shocking! Here's a lovely photo of us with Natia and Clemence at the plantation, a sweet Austrian couple who we naturally got quite friendly with after nearly sitting on their laps for most of the day. 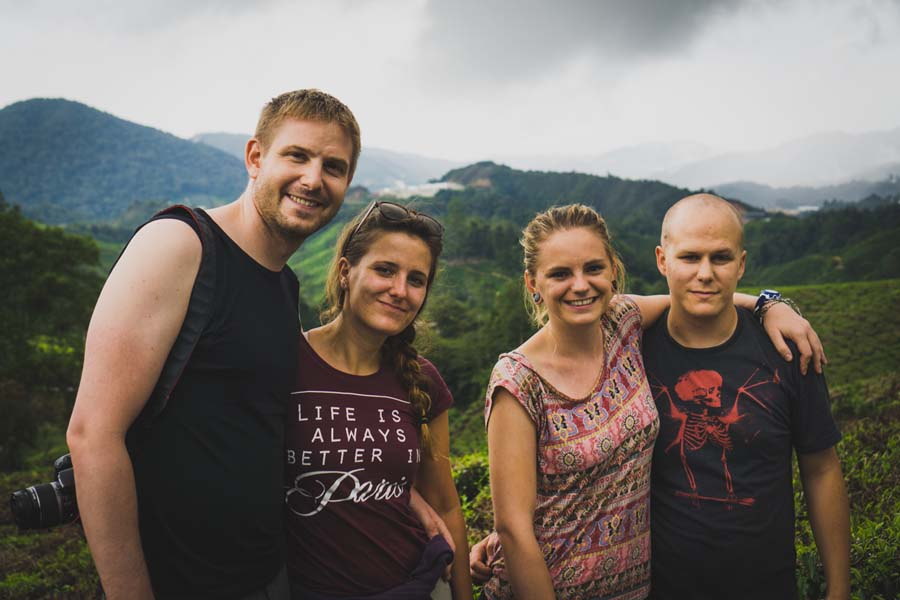 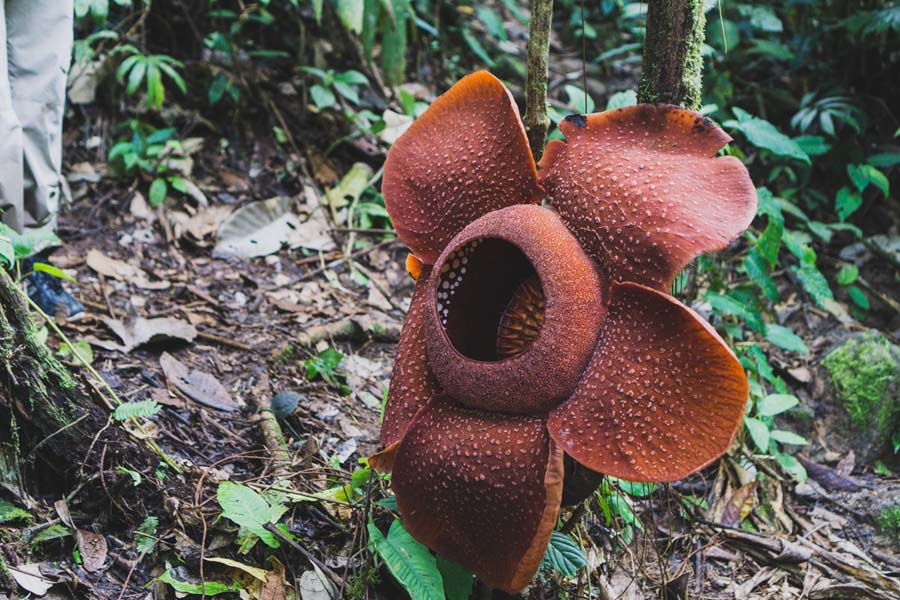 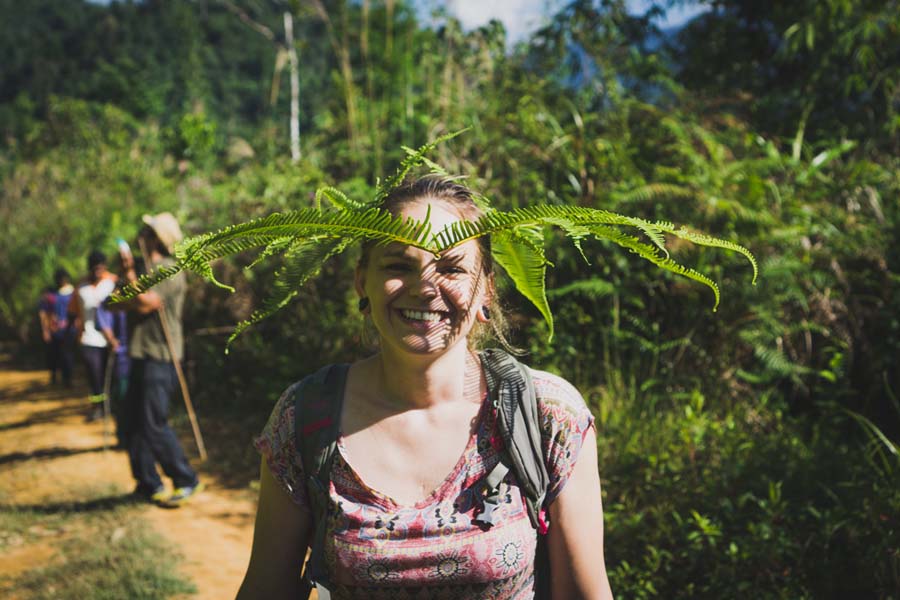 We finished the tour with a trip to a butterfly farm (that also has other insects, which our crazy guide picked up most of to wave in front of us) and a strawberry farm (=ice cream and cake). It was such a great day! On our other day here we explored some of the walks and waterfalls, and also managed to hire some fat bikes (?) in the morning before our bus left. The bikes were a bit old and broken, but I think I still managed to score some girlfriend points for this! 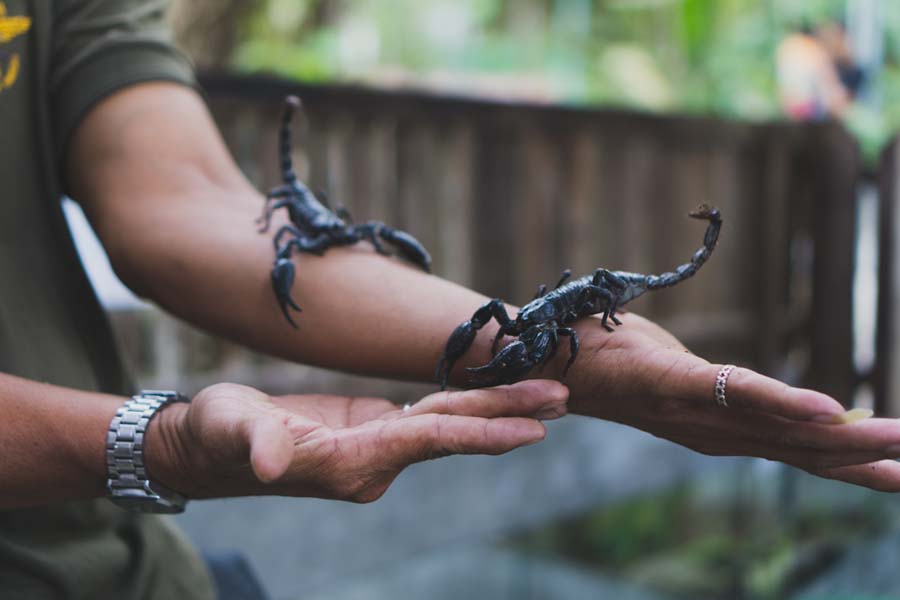 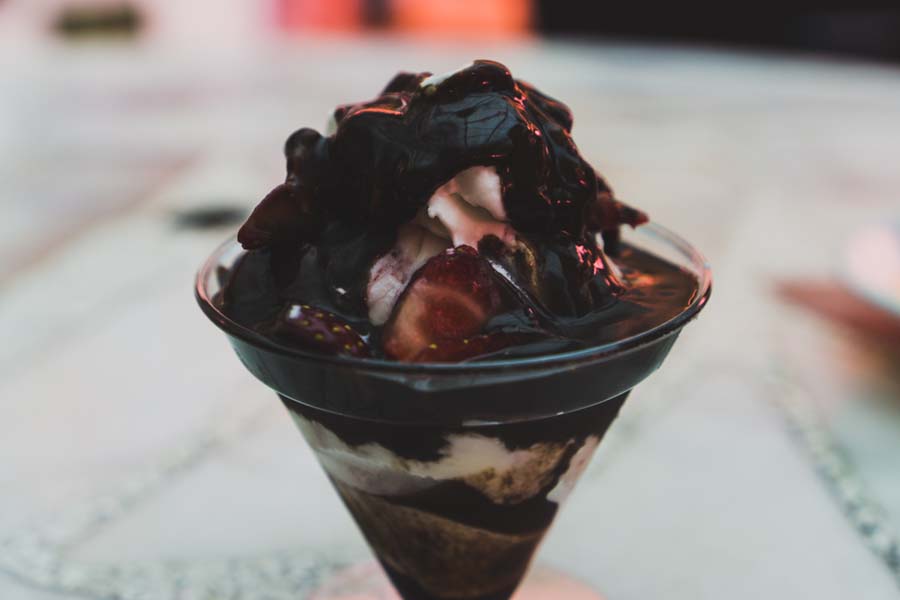 The next stop was Kuala Lumpur, which was very definitely a return to city life for a few days. It's strange how everywhere in the world, cities are full of homeless and disabled people. I'm sure disabled people must live everywhere, but you just don't see people missing half their limbs begging on street corners in the countryside. KL has its fair share of homeless, and you see beds in trees, under bridges, inside bridge fixtures, inside building cavities, anywhere that two walls meet you'll see a makeshift bed of cardboard. It's a beautiful city, with an intriguing mix of high rise buildings and greenery. It's strange to see buildings surrounded by such big trees, and it's hard to tell which was there first sometimes. But I love that. It surely would've been easier to build KL by ripping up the trees first, but they worked around them and let them be. The mix of cultures is the same here, and everyone speaks English as a common language. There are UK plug sockets, cars drive on the left, the pavements exist and are half alright, and you can flush the toilet paper! It feels a lot like home here in Malaysia, just hotter. The highlight of our KL visit was going to a secret bar on a roof top, that Natia and Clemence told us about, called the Heli Lounge Bar. After tripping up the stairs and throwing my drink everywhere I then managed to wonder straight outside the fabric fence, the only barrier to stop people falling off the roof. Must've given the staff a little heart attack, that! It was beautiful though, all the way up there. 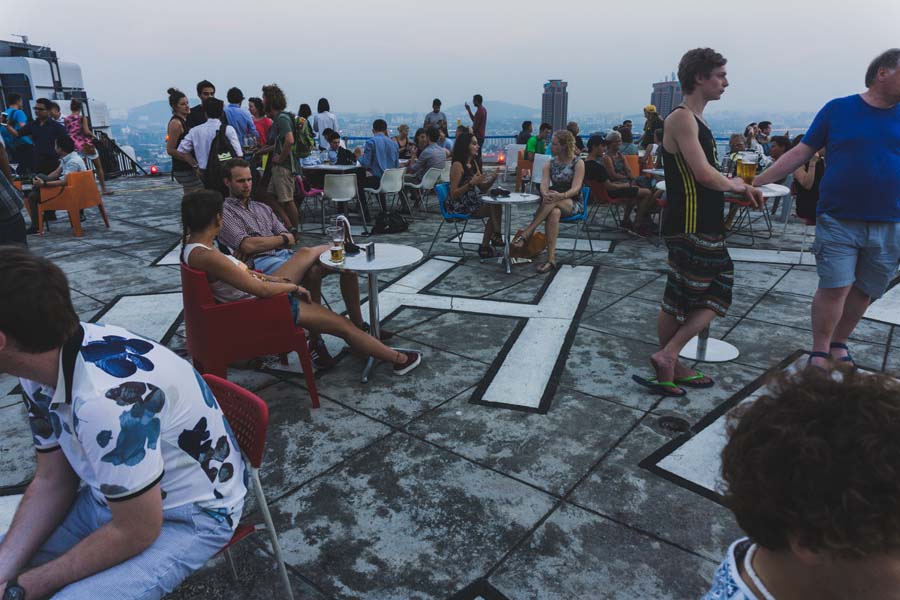 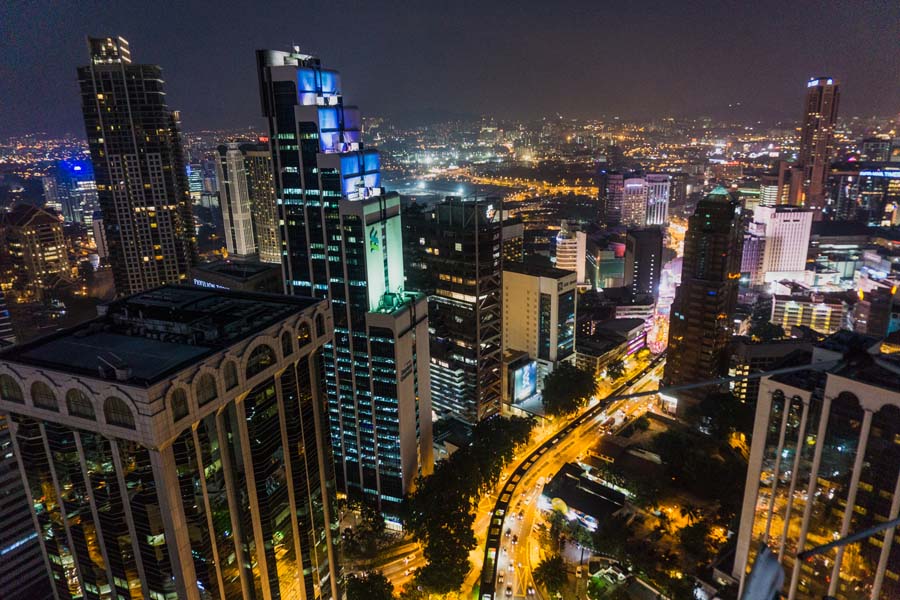 We're now in Malacca (also sometimes spelled Melaka, for some curious reason), our final stop before we take the bus to Singapore tomorrow. The coach we took to get here was like a holiday! It had movies, reclining seats, a meal and everyone was given a cushion after the journey got started. I watched most of Taken 3, but we arrived before the film finished. Well, kind of. We got to somewhere called A Famosa Resort, and it turns out there are two places with that name in Malacca. One is a 10 minute walk from where we're staying, one is a 45 minute taxi ride away. Oops. But we made it, and yet again, I don't want to leave this place. It's so colorful, the food is delicious, the people are lovely, and the buildings could keep me gawping for weeks. They're the kind of rustic, antique and authentic buildings that you could spend a small fortune trying to copy, and not get any of the character of. Plus we found out yesterday that a cinema ticket costs £2.40 and half the films they show are in English, with Malay subtitles. Ant-Man is a good film, go see it! Plus, more girlfriend points haha!