When you plan to go to a "Wonder of the world", you get the idea that it's probably going to be pretty great, but that you're going to have to deal with a LOT of other tourists when you get there. With the Great Wall, we had heard mixed things, but did a lot of research into which was the right place to see it, and it really paid off since we got an amazing stretch of the wall with barely anyone on it. The Taj Mahal isn't quite such a big place, so we were resigned to the idea that we'd have to share it with thousands of other visitors. 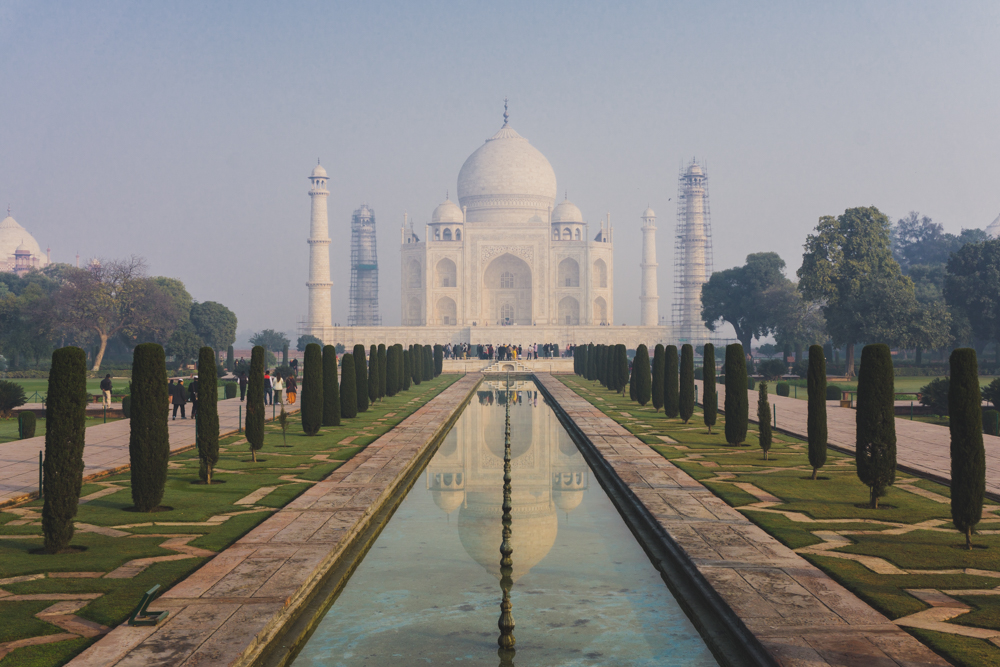 That actually didn't happen with the Taj Mahal either in the end. We got up at 5:30am, and jumped straight out of bed, and by 7am we were at the East Gate, waiting for it to open, having already bought our tickets. They don't let you take much in - no tripods (or Gorillapods annoyingly - I actually saw a guy get kicked out because he had one! This seemed harsh at first, but I guess if you go later in the day when there are literally thousands of people there, then you don't want people hogging the good photo spots, which those sorts of things would definitely encourage you to do), no food, no drink other than the bottle of water they give you, no electronics other than a phone or camera (someone else had to take a torch they had in their bag back to their hotel), no backpacks, no bombs etc. Overall that's a pretty good thing though - the place is immaculate, which for India is really saying something.

There were about 20 people in front of us in the queue when the gates opened, and that was it - We practically had the place to ourselves, which meant I could run around with my camera getting photos from anywhere I wanted. We were warned in advance of a downside to going so early in the morning, and that is that it's pretty foggy. Apparently sometimes it can be foggy enough to ruin it, but for us it actually worked out really well. The fog was definitely there, but it was thin enough that we could just about see the Taj in the distance when we entered through the Royal Gate. This meant that as we got closer, more and more detail was revealed to us, giving it a very mysterious feel as we were walking around.

We'd actually seen the Taj from the roof of our hotel, so we already had an idea for how big it was - it's bigger than anything we could see in any direction - but what you don't notice until you get up close is the incredible attention to detail. There are intricate carvings cut into the marble all around, and inlaid gems make floral patterns all over too. On each side there is a verse from the Qur'an, written in Arabic and spanning the edges of the giant arches. It's completely symmetrical, and that applies both to the building itself, and the grounds it's in. There's a mosque to the left side of the Taj, and to maintain symmetry, they built another building identical to the mosque, that has no actual use. Inside the Taj, sound reverberates around for a very long time - sing a long loud note, and it'll easily carry on for another 10 seconds after you stop (yes, I tried it!). 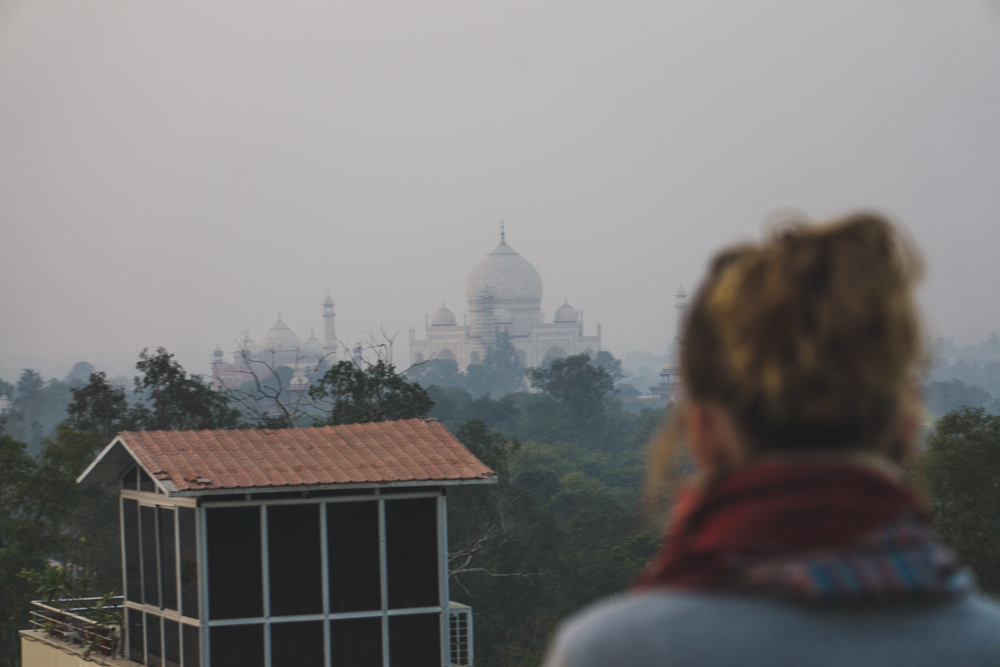 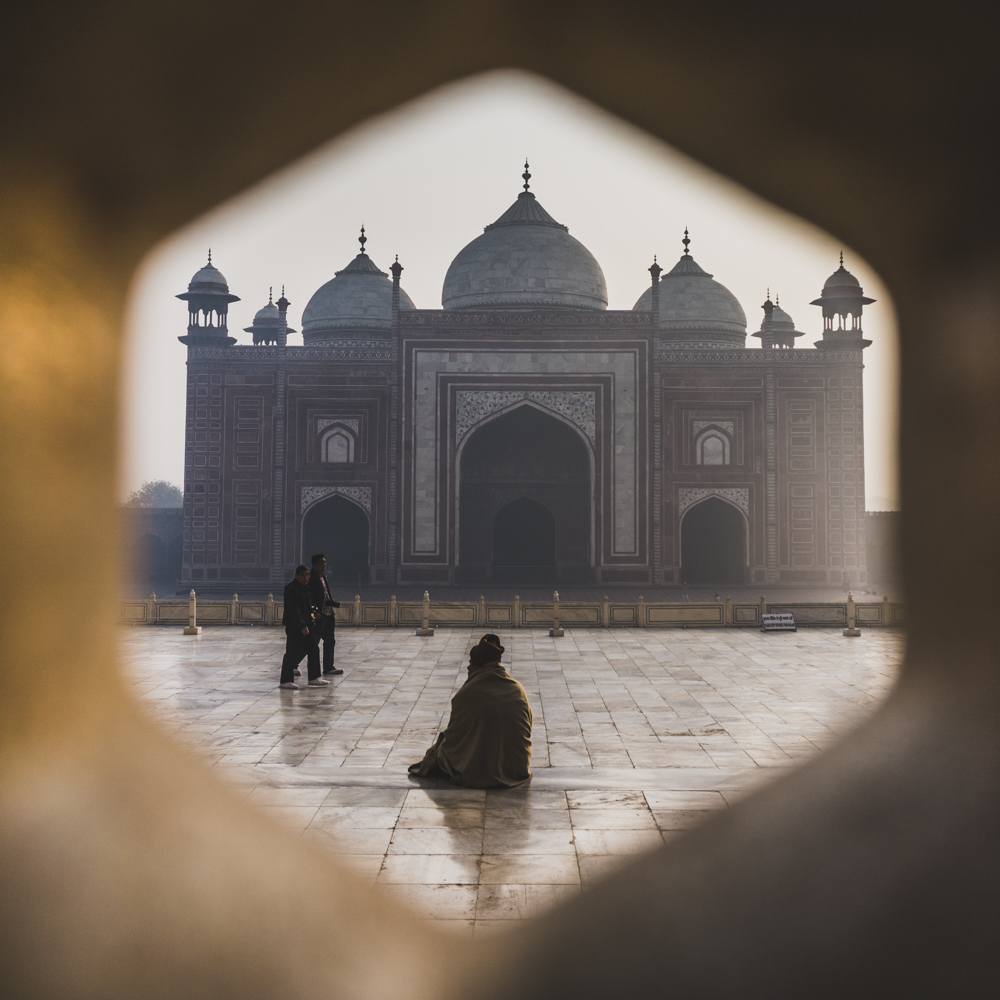 By the time we were leaving (about 9am), the fog had started to lift, and I was able to get a much clearer photo of the Taj, from just outside the Royal Gate (yay!). By this point I had to wait about 1 minute for a small group of people to move on from where I wanted to take the shot, but it still didn't feel busy at all.

I would definitely recommend visiting early in the morning if you ever get the chance to go there - the fog prevented me from quite getting the perfect photo I had wanted, but then a load of people would have looked far worse in a shot than the fog did.