We TOTALLY hit the jackpot with the first resort we stayed at on Koh Tao. Well, I did anyway. After spending months using kettles in shared kitchens or common areas, we got to Montalay Beach Resort in Koh Tao and I nearly cried at the sight of a kettle in our room. Nay, not just a kettle, but a tea/coffee making station, all stocked up with tea, coffee, sugar, cups and bottled water (which obviously went straight in the kettle every day - sorry Rich!). I can't tell you how happy this made me! I could reminisce all day, but I don't think even that would help you understand how exciting it was. So, I'll reluctantly move on... 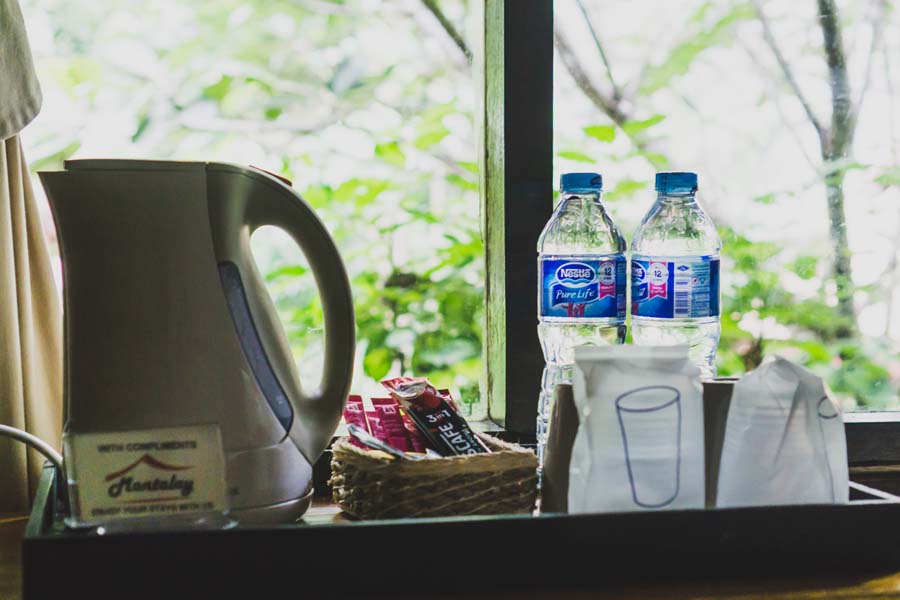 The resort was lovely, and on quite a secluded beach on the east side of the island. The beach was stunning, and the resort has its own beach-view pool and went back into the jungley area just behind the beach. Although this made for a gorgeous setting for the bungalows, it did mean that we got eaten alive by mosquitoes during our stay. We booked the cheapest room at the low season rate, which was definitely worth more than we paid for it. The menu at the restaurant had fried noodles with pork, so I was set for food for the duration of our stay, and Rich loved their western burger with fries. We took the five days we had here as a rest, and did a lot of swimming, sunbathing and ice cream eating, because we both felt exhausted from all the travelling and needed a holiday. It's harder work than you imagine it'll be, all the new experiences, buses, trains, languages etc. Plus we were kind of trapped on that beach, as we really didn't fancy navigating the "roads" we'd travelled on to reach the resort. We loved every minute of our stay here, except for Rich dropping and breaking his phone, and were sad when the time came to book a ride back to the other side of the island.

We took a ride back to the west side, where we stayed at Triple B Bungalows (which stands for Best Budget Bungalows). This was a hard landing back to reality. It was a private bungalow, with our own bathroom, yes, but I swear it must've been about 40° in there in there most of the day. At least it stemmed the tea-cravings! Montalay had been fine without A/C, but it had been shaded by trees. This wasn't, and A/C is now at the top of the list of things to check for with accommodation! Anyway, the toilet was a manual flush (chuck a bucket of water down), the curtains didn't cover the windows at all and the cockroaches bothered my boyfriend ;) The geckos didn't though, thankfully, as they're everywhere. We named the biggest gecko in our bungalow Derek. All the others are named not-Derek. Geddit??

This is a much livelier side of the island though, and we decided to hire scooters for a couple of days to see the sights, as the roads are in much better shape. After being turned away by the first scooter hire company we tried, for never having ridden one before, we had better luck at RPM Motorcycles, as they didn't ask or seem to care if we'd ridden before. I kid, but they had very good reviews, which we'd checked before hiring from them, after reading some horror stories online. Turns out, riding a scooter is a lot of fun! And it was a great way to see every beach on the west side of the island. 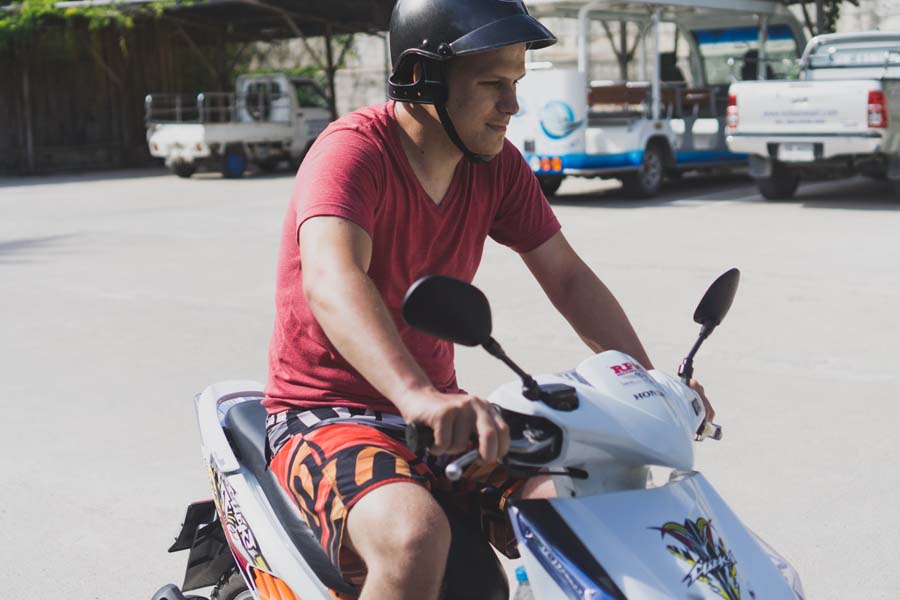 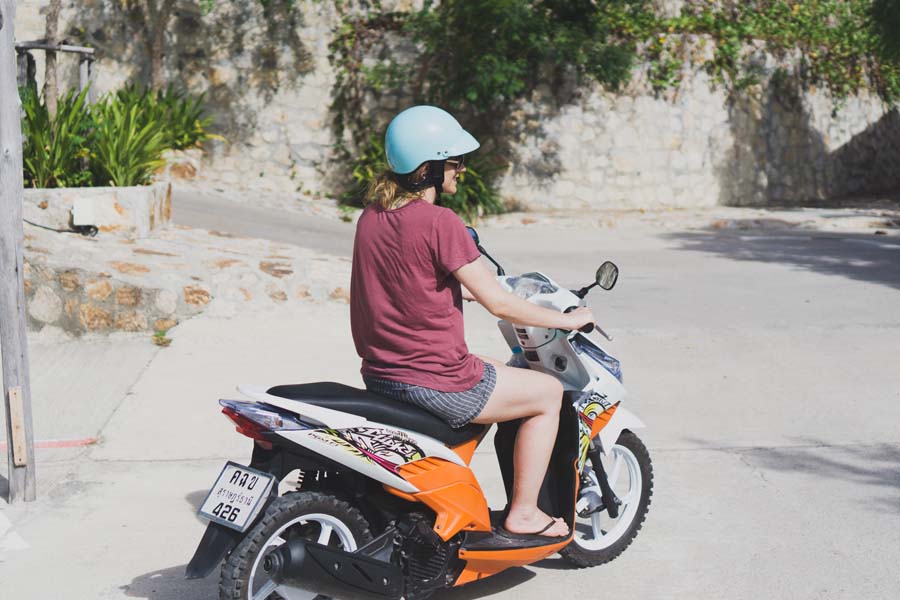 We took the Somgserm ferry over to Koh Phangan, as it's a bit slower and cheaper than the others. We'd booked a room at Da Kanda Resort here (with A/C!), and were able to walk there from the pier, which was lucky as they'd decided to ignore our request for a transfer. The resort was lovely again, but we'd booked the cheapest room so got a leaky (but flushing!) toilet and a front door that didn't shut properly, and no kettle this time, so I was back to bothering the kitchen staff for hot water. We hired some slightly punchier scooters for another couple of days, and saw some waterfalls, beaches, incredible hilltop sights and an island called Koh Ma, connected to Koh Phangan by a man-made sand bank. We stopped here to have some food and watch the sunset, and made friends with the most adorable puppy you've ever met, who quickly developed a taste for Rich's flip flops. 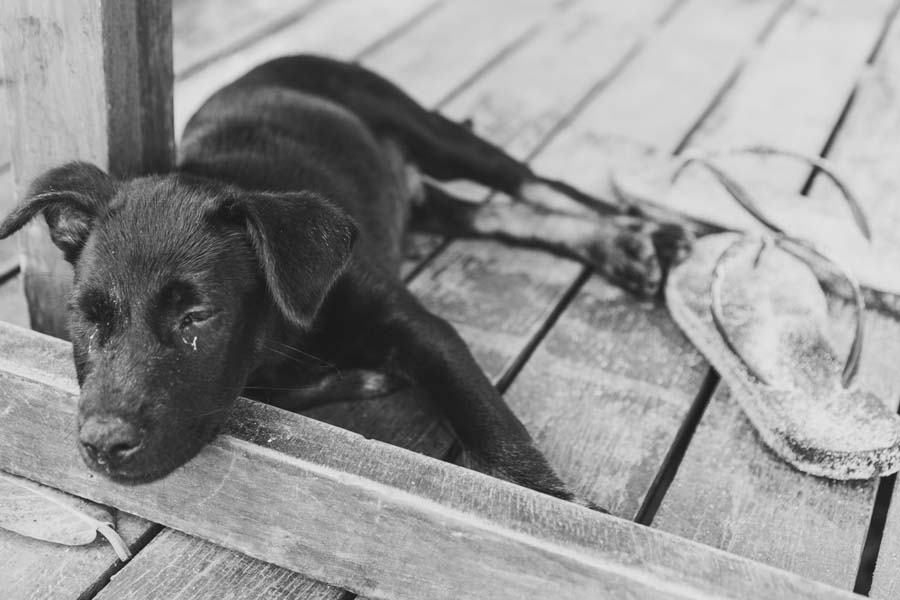 We bought a new tablet (an Asus phonepad) and knocked a few days worth of budget off the trip in doing so, but I'd been without the internet for about week at this point (I had been using Rich's phone until it broke) and had started going a bit insane. Bless his cottons, Rich had been offering me his laptop to use, but using it felt like taking candy from a baby, so I never did for long. We also found an incredible food market on our last night on the island, and ate and ate until we could no more, then took some more food back to the resort for pudding, all for about £4 each. Haha, I love it here!

We took the Lomprayah ferry over to Koh Samui yesterday, which is where we still are now. After a bit of a mess-up getting to the hotel, we're enjoying our second night in another air conditioned room. It'll never get old, as the reminder of the temperature we could be sleeping in hits us in the face the second we step out the door. We currently have it set to 25°, which feels cold compared to outside. I've read the fatality rate for people riding bikes on this island is the highest of anywhere in Thailand at 6 people a month, so I'm not too sure about hiring a scooter here. I have a big list of things I want to see here, but I also kind of like my body in one piece. We're only here 'til Tuesday though, and then we'll be travelling down to Satun on the mainland, before heading into Malaysia. I'm glad we're not here for long, as it's more like a city on Koh Samui, but just with a beach at every turn. Maybe that's just where we are on the island, as we haven't seen much of it yet, but I have a hunch that it isn't. I guess I'll let you know in the next update, if we do end up hiring bikes and seeing a bit more of it!